Michael Davis On Being Loud and Smart 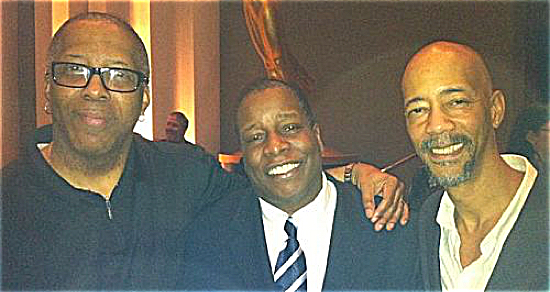 Some weeks ago a Hilton manager made a very big mistake. Once Hilton Corporate realized who and what they were dealing with, I was asked what I wanted. This question, always asked in situations where litigation is an option, is a ploy devised to test you. Your answer determines their resolve, your intelligence and rather or not a hotel offers you $50.00 off your next stay or $50 million for you to go away.

Back in the early 2000s two people swore I was at the DC booth during the San Diego Comic Con loudly calling DC racist. So loud and vulgar was my purposive verbal assault the result was to kill a merchandising deal I had with Warner Bros. Consumers Products.

I don’t want to give the impression DC Comics acted against me as a collective in a conspiracy to take me down. They did not. It was a different time and they were a different company and shit like this was handled a different way.

DC Comics is and was under no obligation to be in business with me. It was and still is their house. Almost a decade before the SDCC “incident” I joined Denys Cowan, Derek Dingle, Christopher Priest and Dwayne McDuffie in setting up shop at that house. The original Milestone deal with DC was considered groundbreaking and it was. It was also terrible for Milestone.

Except for editorial, every move inside and outside comics DC had to approve. I didn’t sign that deal, that deal was as crazy as some say I am. I can’t prove I’m not crazy. I could prove I was in NYC the morning I was supposed to have been that nigger at SDCC. Whoever wanted to set me up looked at the SDCC program and surmised I was still in town because I was listed as a guest on a Sunday panel.

Consequently, when it became clear the loud mouth person who loudly called DC, racists, wasn’t me (or even existed) once again I was asked “What do you want?” What did I want? I wanted black kids to play with a Static Shock action figure.

“I just want the deal reinstated.” Easy, right? No harm no foul. All is good in the world, right?

It wasn’t, because DC said no.

Why on earth kill a deal that would generate revenue? Brand Milestone and DC in the black ad space? Create an action figure based on the mega hit TV show Static Shock? Certainly spark a lawsuit? Last and most important to me, give kids of color a hero to play with? Who knows? I never got an answer, but my top guesses are:

1) Because they could. It was their house. I was loud.

2) That was then, now Milestone has another deal at DC and again they don’t want me.

Some at DC or even Milestone may have floated the rumor that I can’t be vetted for future business when asked to explain my absence. Saying my loud persona and profanity-laced opinions will drive serious business away.

Then there’s the matter of my resume, my resume doesn’t add value?

Combined, the Milestone partners have not reached the markets or generated the revenue in comics I have by myself.

Here’s reality. Until revealed otherwise, Milestone’s core business is comic books. Without Diamond (via DC) they have no distribution outlet. My distribution for my educational imprint, The Action Files, reaches American schools via Pearson Learning. Pearson, the biggest educational publisher on earth, likes very much what I have done. My Guardian Line imprint has direct distribution into African American churches that additionally gives me direct access into the black household via Urban Ministries Inc.

UMI is king in the Black Christian space. Think Diamond but with its own comic book line.

My relationship with Pearson is in its 20th year and I just celebrated my 10th year with UMI.

Those deals were and are my house.

How’s that for loud?

The church is the most powerful force in Black America. Milestone’s distribution into the very market Denys created Milestone for was assured when I was in the mix. I didn’t need Diamond or DC to reach the educational or black market on a grand scale nor did I need Milestone. And as evidenced by their actions, they clearly think they don’t need me.

But they do, to get into the African American space directly on this scale, they most certainly do.

Only an idiot would dismiss those markets willingly without as much as a word as to why. It doesn’t take a genius to know those guys are not idiots.

No, there is another play here.

They do need me, they just don’t want me. Something is brewing and they see a problem with my involvement. Could some guy still hate me and have sway over at DC? Could that be the reason?

I could see that but just how much of a little bitch would you have to be to let that be a factor? Nah, there’s s something else, something big that negates comics and uses a different gage to reach African Americans.

Or maybe it’s a Milestone partner who thinks I’m too loud and causes to much trouble. Happened 23 years ago; why couldn’t it happen again? Makes sense right?

Here’s the problem with that argument I don’t cause trouble. When that shit was pulled then I ended up running Motown Animation and Filmworks and Milestone jus… ended.

Now what about being loud? What about my language? Ok, let’s say I’m loud. So fucking what?

Name a black creator or any creator who has worked harder and contributed more than I to bring people of color into comics. Not inspired it, or talked about it or sold a series of books marketed for it. Name any creator with an educational imprint (not book, imprint) at two major mainstream publishers and another at a Christian publisher.

That rant is just a few high and mighty “look I’m great” and some “so fucking what” thrown for my hard core fans. Think of my stuff like an old Marvel or DC comic after a while you wonder where the fight is. I’m sure some were wondering where all the ‘fucks’ were.

DC wrote me a check which covered my lawyer and little else. That’s what I wanted when it became clear DC would rather risk a massive lawsuit than give me back my deal.

I was livid and was about to bring the noise when I realized something. The two Warner Bros. people who brought me into the deal were at a real risk of losing their jobs. So, to protect them I settled for little of nothing. As a result, nothing is what happened with Mattel and others.

Yeah, I am loud. That’s so people hear me. I have a singular goal, reach as many kids of color and help them realize their worth. What I absolutely will not do is play stupid when faced with stupidity and because of such some see me as a problem after they have used my resources that is, however I’m not the problem. The problem is one Black Hollywood has had for years.

The problem is fear.

Fear of drawing attention to subjects best left alone or risk looking less professional or less white, take your pick. Black Hollywood has arrived in comics and with it the pursuit of the dollar above all else.

Milestone has closed ranks to avoid or minimize a lawsuit, but they can’t. Nobody can. Can they win? Can I? Winning a lawsuit at this level really comes down less on who’s right and more on who’s willing to go to the wall screaming; “I don’t give a fuck” and has deeper pockets.

I’ve been told Milestone is under the impression my resources are limited which is why I won’t sue. They arrived at that notion I assume because I haven’t sued. I’ve also made no secret I don’t care about money so I must be broke.

I don’t care about money. That’s true, however, the banks that hold my mortgages won’t take food stamps nor will any other lender or service. Membership does have its privileges until you miss a payment. All that said, I can’t compete with the kind of bank the Milestone partners would bring to the table, not even close.

Could I sustain a lawsuit with my current resources? I’d wager better than they could. How so? Because my hourly billing from one of the most feared law firms in the world is a hug as my representation is free. I’ve always said I know good people it just so happens I’m related to some also and the firm believes in her and she believes in me.

So I could go to the wall screaming “I don’t give a fuck” but as evident by my actions that I do give a fuck. I didn’t sue DC, I didn’t sue the Hilton when I had them dead to rights some weeks ago and I’m not suing Milestone. I don’t operate on that level. The only benefit would be to me. Black kids wouldn’t be reached but I’d be able to buy some more shit I don’t need. I don’t need any more shit in my life, I needed a call from three guys but that ain’t happening.

I’ve reached out to Milestone 2.0 from day one of this bullshit; still not a word. So, I’m done. Except for an interview I’ve asked be held up on the off-chance I’d hear something, this will be my last public statement about Milestone.

I’ll go my way and they will go their way. Pity, another riff between two black playas. No wonder we can’t win at this game, seldom are we on the same side.

There will be those who believe me a fool for taking this stance, well that may be true. It’s also true that without Paul Levitz there would be no Milestone. Paul and I butted heads, but the fact remains: no Paul no Milestone. It would be easy to change that narrative for personal gain.

Reggie Hudlin has wanted to be part of Milestone since Day One and I’ve defended him against claims he just jumped on the bandwagon after Dwayne died. No Paul, no Milestone. Reggie down since Day One – that’s the truth and that’s what I say.

My Milestone history is written down and public. Once completely co-signed by Milestone now (no doubt fear of litigation) it’s being rewritten. That is a bad move. A very bad move, because I will go to the wall screaming about that. Both the talent program and the Static Shock Universe were created by me and like everything I write I can prove.

The thought of having to do so is sickening and was 23 years ago when I gave Milestone a gift. It was sheer stupidity that turned that gift into a lost.

23 years ago I foretold what would transpire and I was right. I see this future also and wish it was not to be but it already is. Like I said, pity.

I still want Milestone to succeed. I would still help them do so but I’m not pretending to be anything I’m not.

What I am help create it, who I am won’t help destroy it.