MICHAEL DAVIS: Who To Blame, Part 2 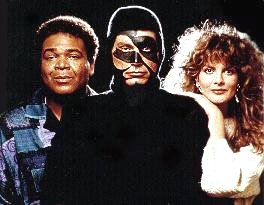 As I said, I’ve had a very interesting career in comics.

Denys Cowan and I were biding time until the premier of Mike Grell’s Jon Sable series on television. I’d been invited to watch it in Mike Grell’s hotel room and I invited Denys.

We were wandering around the 1987 Mid Ohio Con and I was on Cloud 9 thanks to John Ostrander, who issued the invite. While Denys was looking at comics at a retailer booth I moseyed over to a creator’s booth. As I mentioned before I talk to everyone and the thought of looking at someone’s work while they stand there and watch me look at their work is just crazy to me.

So, being me, I started asking questions about the copies of what looked like a quickly Xeroxed and even more quickly stapled comic book. One of my pet peeves is presentation. I don’t care how good an artist you are if the presentation of your work sucks I simply don’t want to look at it.

Hey, I don’t care how good a chef is in the kitchen or how good the food is, if I see a roach I’m not eating in the restaurant. I mean who the Hell wants a haircut from a barber who’s own hair is a mess?

Not me my friend, not me.

The book I was gazing at looked homemade – but – the two guys behind the table were cool as shit and the comic was the most original thing I had ever seen in comics before.

The artist and writer I was talking too were Kevin Eastman & Peter Laird and the book was Teenage Ninja Mutant Turtles.

I know, how freakin’ cool was that?

And that is why I talk to everyone.

The next night DC comics had a dinner and I got Peter and Kevin in. Well, really, Denys got them in because he got me in and I just extended the invite to Peter and Kevin.

Kevin remembered our Mid Ohio meeting and that dinner when I saw him a year or so later after he became a zillionaire. Kevin and I have been friends for over 20 years. He’s still the cool ass guy I met in Mid Ohio in 1987 success has not changed him a bit.

This is a good a time as any to tell you the true story of the Teenage Ninja Mutant Turtles.

It was my idea.

The original idea Peter and Kevin came up with was called Teenage Ninja Negro Turtles.

I told them they should change the turtles to something that would not scare white people.

“Make them mutants. Everyone likes mutants!” I said.  “That’s a stupid idea.” Peter said. “Yeah.” Kevin agreed.” But, the next night at dinner after a whole lot of slow screws against the wall…that’s the name of the drink we were having so get your mind out of the gutter – they saw the light and agreed to give me half of any proceeds if my idea, the Teenage Ninja Mutant Turtles caught on.

Both of those guys are really busy so I’m sure that’s why they have not returned my phone calls lately. Hell, it’s only been 20 plus years.

OK! OK! The part about me helping to create the Turtles was not exactly true…unless there’s a lawyer out there who thinks they can make it true…

When I left Peter and Kevin’s table I strolled over to a booth, the banner said, Open Space.  As you may know I talk to everyone and I began talking to a very nice young lady named Carol Kalish. Carol was promoting Marvel’s new Sci-Fi magazine called, you guessed it, Open Space.

Carol and I spoke for about two hours. When someone came by the booth she would talk to him or her until they left then we would continue our conversation. Carol and I had one of the best conversations I’ve ever had. It was so good I completely forgot the nirvana that awaited me, meeting Mike Grell. Denys found me and told me he would have to get to Grell’s room a bit later because he was about to be interviewed by someone.

I told Carol goodbye and she told me to come back with my portfolio the next day.

So, now the time had come for me to meet Mike Grell!

I found his hotel room, knocked and realized I felt like a little boy who just found out where Santa lives. The door opens, I can see the room is full and there in all his glory was Mike Grell!

Mike Grell had opened the door for me!!!

When I heard my hero say those words I felt like I was hit in the stomach. I could not speak. I stood there like a deer in the headlights. Thank God, from within the room I heard John Ostrander’s voice; “Mike, I invited him.”

Without saying a word to me Mike Grell turned around, and I followed him in.

There were a lot of people in that room but I can’t recall whom because that’s when I met Kim Yale, John’s incredible wife. Kim passed away some years after. Because of her incredible kindness to me that day, after hearing of her death, I only remember her, Grell and John from the Sable screening.

Mike was in a bit of a mood, or so I thought, so after I met everyone I sat down and shut up. Before the movie came on Kim made me feel not only welcome but also somehow required at the gathering. It was as if I was expected to be part of this group from the start. That’s the best way I can explain it.

Then the show came on.

During the commercial breaks there was rapid-fire discussion about the film. I didn’t say shit.

Then the show ended.

At least I thought it did. It may have been great but it wasn’t the comic by a long shot so to me it sucked. I racked my brain for the quickest excuse to get the Hell out of Dodge. Why? Because the last thing I wanted to be was part of “What did you think” discussion which I knew was coming.

“What did you think?”

I was so done. Super done, and it was even worst than I thought it would be!  It wasn’t a discussion; Grell went one by one to everybody in the room and asked them, “What did you think?”

Maybe, just maybe Grell wouldn’t ask me. I mean he had yet to speak one single word to me in the 2 plus hours I was in his room.

No such luck. After Grell asked everyone in the room he turned to me.

“What did you think?”