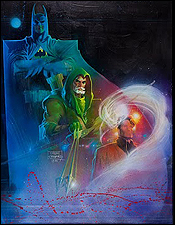 No, no no, no…. That’s the title of a very famous song by the Marvelettes. You may be too young to know it by just the title, but I’m pretty sure if you heard it you would recognize it. If you or your parents own any greatest hits albums by Motown then this song is bound to be on there.

If you are really young and a geek fan boy (as am I) let me save you some time. Don’t bother goggling the Marvelettes. They were a singing group, not an all girl or gay men superhero group from Marvel. Now that I think of it, that could work…

But (Peter, I swear I’m writing you a check) I digress.

After the great speech Bill Clinton gave at the Democratic National Convention, “Don’t mess with Bill” could easily have been the heading of a piece about Clinton. Alas, as hard as I tried I could not think of any way to weave a comic book narrative from his speech. Well, I could but that would have meant I’d have to be clever and after the week I’ve had clever would be pushing it.

Trust me, you don’t want to know.

The Bill I’m talking about is my dear friend for over 20 years (since I was five, Jean) Bill Sienkiewicz.

I met Bill when he was doing Moon Knight. I was not a fan; I thought he was one of a long line of artists who were doing their best to copy Neal Adams.  We met at Marvel Comics one day when he was bringing in pages. I think it was Denys Cowan who introduced us and Bill showed me some of his work. I remember thinking two things. The first was the comic book reproductions did not do his work justice. His originals were far and away much better to look at. The second thing I remembered is, yes, his work looked a lot like Neal Adams but that look was just surface deep. There was uniqueness to his work that was all Bill.

After that meeting I went and brought all the back issues of Moon Knight I could and, yeah, by “bought” that means I asked one of my contacts from Marvel to hook me up. Yeah, I got them free, but I would have paid if I had too.

The next time I saw Bill at Marvel he was delivering a painting. It was a New Mutant cover all I could think is; “Shit, this motherfucker can paint also!”

Yeah, I was a bitter bastard. Age and good living has mellowed me, and by mellow I mean “tequila.”

Bill and I had a cordial if not friendly relationship… until one day at some industry event we started talking about illustration. That’s when we clicked. Bill was not a comic book artist who wanted to be an illustrator Bill was an illustrator who was doing comics.

That’s common in the industry now. What people seem to forget is that Bill started that trend. I say without hesitation Bill Sienkiewicz’s art changed the way comic art was done and if not for Bill and his pioneering bad ass work the industry may look different today.

For my money Bill is the artist/illustrator who paved the way for comics to have the depth and artistic reach they have today. Yes there have been comic artists that have painted covers or done innovative designs within the story lines but Bill’s cover work and later his graphic novels elevated the art form to another level. Unlike those who may have dabbled in comics as mainstream illustration up to that point what Bill was doing stuck and spread.

Andy Helfer was a big time editor at DC in the 80s. Denys introduced me to Andy and I showed Andy my painting portfolio.

Andy looked at my work and said “You could be our Bill Sienkiewicz.” Andy was not saying that because my worked looked like Bill’s ­– it didn’t – he was saying it because the kind of work Bill was doing over at Marvel was in a class by its self. That was said by one of comics leading editors working at one of the two biggest comic book publishers during the second silver age of comics.

That’s like giving props to John, Paul, George and Ringo before they became the Beatles. Andy saw clearly that Bill was changing the industry.

I look at all the new talent and groundbreaking work being done today and often think, yeah, that’s nice but Sienkiewicz did that shit 20 years ago.

As with anyone, if you are so good for so long some people tend to not really acknowledge you as you should be acknowledged. And when I say some people I mean young stupid artists. Some people even resent your success if you are the best at what you do and have been doing it for a while. Case in point: people don’t just dislike the Yankees, they hate the Yankees.

I’ve have not run into any people who hate Bill but at this year’s Comic Con I did hear this young artist dismiss Bill’s work and even say “He’s no Alex Ross.”  True. But with all due respect to Alex, if there was no Bill Sienkiewicz there may have been no Alex Ross.

I took a moment to look at the artist’s work and told him he was neither Alex Ross nor Bill Sienkiewicz and talk is cheap, like the portfolio his work was in. I was a bit harsh, but in my defense I was out of tequila…

There really should be an admissions policy to get into artist’s alley. I mean…ugh.

Take a moment to reflect on the immortal words of Dr. Dre…

Nowadays everybody wanna talk like they got something to say

People forget that Bill changed the game. And he is still changing it.

Bill, if you are reading this (and I know you will be because I’m posting it on your Facebook page) if I told you this every day for a year it still would not be enough. You, my friend are a true living legend and I’m proud to be your friend.

But…the next time I give a party at Comic Con and your ass doesn’t show up I’m posting those photos (you know those photos) on Twitter, Facebook, YouTube and the Society of Illustrators website.