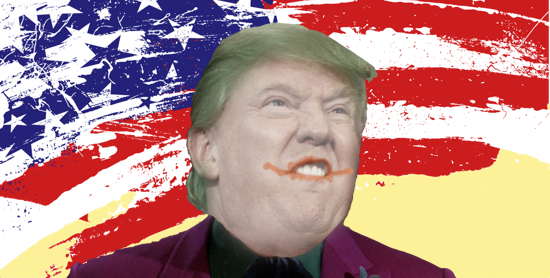 ComicMix comments upon pop culture and entertainment and, in this silly season of primaries, politics qualifies as entertainment. Sometimes perverse entertainment, I grant you. I’m from Chicago and I was raised during the reign of King Daley the First so I know from political entertainment. As Studs Terkel said many long years ago, “Chicago is not the most corrupt American city. It’s the most theatrically corrupt.” So that’s my standard.

I was raised Republican but, on reaching voting age, I became a Democrat because that was the only way to vote in a mayoral election that counted in that city – the Democratic mayoral primary. The last Republican mayor of Chicago was “Big Bill’ Thompson was booted out of office in 1931. There is no Republican Party to speak of in Chicago.

So I know from political entertainment, although currently it’s hard to decide to laugh, cry, or go screaming into the night.

Let’s start with the Democrats, the apparent adults in the room. In the New Hampshire primary this last week, Bernie Sanders got 60% of the vote and fifteen delegates to the Democratic National Convention. Hilary Clinton’s share got her nine. However, as Larry Wilmore pointed out on The Nightly Show, the Democrats also have something called superdelegates and all six of those went to Hilary. So, despite Sanders clearly winning the popular votes, they both left New Hampshire with fifteen delegates each. Now there’s Common Core math for ya!

The real entertainment, though, was over with the Republicans where an actual reality show star topped the field in the GOP version of the New Hampshire primary. Donald Trump’s numbers, as he himself might say, were huuuuge. He got 35% of the votes and that was more than twice the numbers posted by his nearest competitor, Gov. John Kasich of Ohio. (All together now – “Who?”) Even the GOP leaders don’t want Trump. His nearest competitor is Senator Ted Cruz and the GOP higher-ups don’t much care for him, either. I understand most of Cruz’s fellow senators are not fond of him.

In addition to Trump, there are two other Republican candidates seeking the Presidential nomination who have never served in public office – Dr. Ben Carson and Carly Fiorina, although Fiorina dropped out of the race after New Hampshire. Their main appeal to the voters seems to be that they have never been politicians. The distaste for Washington seems so deep that some voters will take someone who has zero experience in politics and give them the most difficult, most challenging job in politics.

Before this whole brouhaha started, the presumed nominee was going to be Jeb! Bush, brother of former President George W. and son of former president George H. W. Bush. That flamed out pretty fast. He now has his mother stumping for him as well as his brother, not known in most circles as the best Prez of the U.S.A., will also be on the election trail. One of the saddest things I’ve seen was Bush pleading with a sluggish audience to applaud. And then there was the moment in the Republican debate when Bush interrupted Trump only to be shushed by the real estate tycoon.

You have to say that Trump is the real star of the show. He gets the attention, the audience, and the best (or worst) lines, He reminds me of Captain Boomerang when I wrote him in Suicide Squad. Every time you thought he had gone as low as he could, he’d find a new level to which to sink.

Here’s a sample of Trump:

“What can be simpler or more accurately stated? The Mexican government is forcing their most unwanted people into the United States. They are, in many cases, criminals, drug dealers, rapists, etc”

“If Obama resigns from office now, thereby doing a great service to the country, I will give him free lifetime golf at any one of my courses!”

“All of the women on The Apprentice flirted with me – consciously or unconsciously. That’s to be expected.”

“Donald J. Trump is calling for a total and complete shutdown of Muslims entering the United States until our country’s representatives can figure out what is going on.

On unemployment numbers: “5.3 percent unemployment – that is the biggest joke there is in this country… The unemployment rate is probably 20 percent, but I will tell you, you have some great economists that will tell you it’s a 30, 32. And the highest I’ve heard so far is 42 percent.” (Note: during the Great Depression, unemployment peaked at 25%.)

About his daughter, Ivanka: “Yeah, she’s really something, and what a beauty, that one. If I weren’t happily married and, ya know, her father…”

Trump has been generous in providing fodder for Noah Trevor, Larry Wilmore, Bill Mahar, John Oliver, and now Samantha Bee (whose new show is great) as well as all the late night broadcast folks and comedians and satirists across this great country of ours. That’s added to the entertainment value. Still…