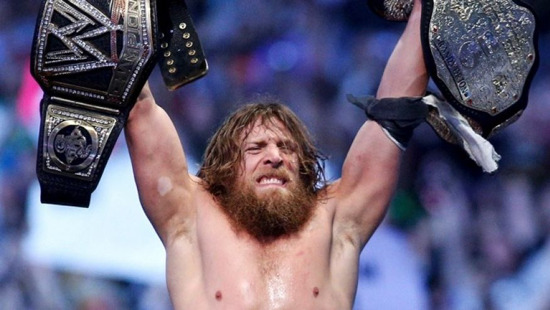 Forgive me, friends. I need to take a break from the comic bookery in order to indulge in my guiltiest of pleasures – pro wrestling. A big to do went down this week, and it behooves me to share my thoughts, feelings, and praise. In case you want to be technical about it: the WWE had some (terrible) comics out in the late 90s. This column doesn’t have anything to do with that, but maybe that will grant me the temporary pass for the week? Yeah… that’s the ticket.

On Monday evening, Brian Danielson – known to WWE fans as Daniel Bryan – retired from professional wrestling. He is 34 years old. As he would explain it to his hometown crowd in Seattle (Brian hails from Aberdeen, WA), he’s simply no longer fit for in-ring competition. “I started wrestling when I was 18”, he began, “… and within the first few years I’d gotten five or six concussions.” Brian explained that over the course of 16 years, he’d suffered from too many concussions, ten of which are documented. After being sidelined a little under a year ago with a final scan that showed swelling and lesion on his brain… it was time to take his bow.

Over the twenty-minute promo, Brian humbly thanked the crowd and the WWE Universe for getting behind him. He used the term “grateful” a lot. He held back tears. He thanked the special kids – like Conner Michalek – who showed him what real grit is. He thanked his family and his wife. He also mentioned that he’s totally down for making a Bella baby, and giggled with glee as 10,000+ fans shouted “That’s what she said!” He ended his speech with a nod to his father, who saw Brian be cheered at so loudly that it stopped the entire live segment shortly before his passing. Brian led the crowd in one last “Yes! Yes! Yes!” chant, and went to the locker room, no longer a professional wrestler.

I could regale you all with the tale of how Daniel Bryan restored my faith in the WWE product. I could wax poetic on how he proved that a solid work ethic paired with a fearless attitude helped elevate him from the undercard to main-eventing Wrestlemania in front of 70,000 fans. I could breakdown the entirety of his career for you, in an effort to show that he beat the odds in 16 years far better than the immortal (and racist) Hulk Hogan or Stone Cold Steve Austin. But others well versed in the Internet Wrestling Community have already done this. If you care, I implore you to seek it out. I, as always, am choosing to digress.

Brian Danielson’s retirement brought streams of tears to my face. Here is a man, only eight months my senior, being forced out of the thing that defined his life up until this point. And make no bones about it: he will never wrestle again. For better or worse, stopping now means he has the time to find new passions and new meanings. I’m sure becoming a father may be one of them. He’s also an eco-friendly Earth-hugger… which means he may be saving the planet instead of putting it into a LaBelle Lock or delivering a Shining Wizard to it. And maybe, if he’s willing, perhaps Brian would return to the WWE to train the next generations of superstars. But as the aforementioned Texas Rattlesnake would declare… it takes a long while to get professional wrestling out of one’s system.

More than anything else, Brian Danielson (and his alter ego) was able to make me remember why I loved professional wrestling in the first place. His passion leaked from every pore. When the crowd would shout his name in cheers so loud that he couldn’t finish a sentence… the creeping grin that couldn’t escape his face showed a performer who was clearly in the game to play it, not just to pay the bills. In the ring itself, Danielson could do it all. He put his body on the line in every match, knowing that being a head shorter and 30 pounds less than nearly any opponent left the burden on him to convince fans he was worthy of wins. He proved to me that anything is possible if you put enough effort into it. Call that cheesy if you must, because I agree with you. But it doesn’t take away the truth: Daniel Bryan made me a believer.

I’ve no snark, nor witty way to end this week. I only want to take my little corner of the internet to post loudly to Brian Danielson: