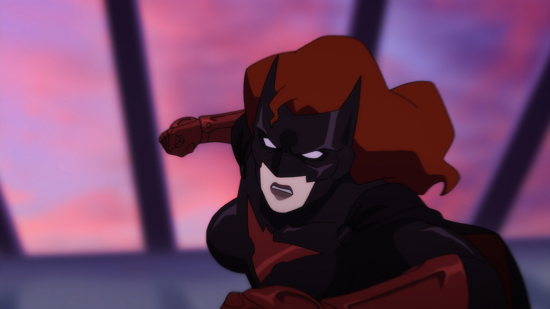 So last night I got the chance to attend the world premiere of Batman: Bad Blood. It was overall a great film; DC is really winning at animated movies. Additionally, this was the first time that Batwoman and Batwing were featured in a DC animated film.

I praise the filmmakers for handling both race and sexual orientation with dignity and respect. At no time during the film did I ever feel that they abused the characters or use their diversity to define them. I really mean that; they handled sexual orientation and race great. Do you see the “but” coming up ahead yet?

The thing I’m going to be miffed at is the female issue. The cast had four named female characters. The first one was our heroine, Batwoman. The second and third were the villains, Onyx and Talia Al Ghul. The fourth was a Wayne Enterprises board member whose name I don’t recall but her basic purpose was to bitch and nag at Lucius Fox. So once we discount her as a non-player in this equation, we have three major female characters. No, you’re wrong; I’m not complaining about lack of female characters. (They actually address that issue at the spoiler event I won’t mention. Another win for the filmmakers to be honest.)

It’s the fight scenes. They had fantastic fight choreography and they don’t get stale in the action. Here’s that “but” you saw coming. Batwoman shows up and ends up fighting one of the two female villains. She rarely fights the main male villains and when she does, she is overpowered every time. The female villains are easier challenges for her. Sigh. She is a military trained fighting machine! She should not go down so quickly in every single fight.

Here is the worst part: I was willing to not dwell on it. It was her first animated appearance, plus it’s obvious they want to continue growing the Bat Family on screen. She will be back so hopefully her next appearance will show a well-rounded superhero.

Then the after-screening panel started. Director Jay Oliva said all the right things; made all the right points about race, gender, sexual orientation, and how fans can keep these things coming if only they support with their moolah. (I’m paraphrasing but I think I get bonus for the correct use of moolah.) I really believe that he wants to showcase strong women in his films and I know that he likes to focus on female superheroes. But then Oliva said how he made sure to include a girl fight in the film and I literally facepalmed right there. I wish someone had taken a picture because I hit my face so hard, I think I left a mark.

You don’t need to include a girl fight for the sake of the girl fight. It doesn’t really add anything of substance to see the women fighting each other. There are occasions where a “girl fight” can add to the story. But to deem it a necessity just for the sake of no actual worthy reason is frankly insulting. Women can be on opposing teams and just fight the opposing males. It’s ok.

In an equal world, women can fight men just like they can fight women. I’m not saying that every time they will be victorious, or that women can only fight men. But I would rather not see how an action sequence is going to play out before it starts. Give the female superhero and villain a change. The results will surprise you and I’m betting in the best possible way.