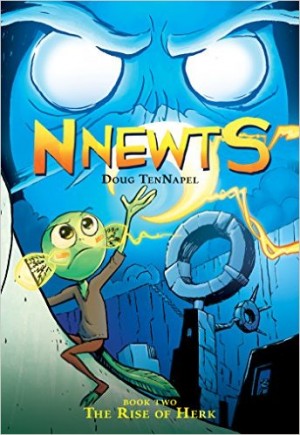 nNapel’s imagination and productivity. A new year and a new book from the cartoonist. This year’s offering is the second instalment in his new Nnewts universe, a follow-up to last year’s Escape from the Lizzarks.

It’s a colorful, imaginative world of varying races and creatures but the basic battle between good and evil remains recognizable to readers. The Nnewts are one of the predominant races and poor Herk was intentionally born with weak legs, all part of some master destiny. He gains magical powers and is called upon to use them to protect Amphibopolis from the threat of the vile Snake Lord.

The story is also about family, the one made from blood and the one made from love. He’s been separated from his brother Zerk, raised by Pikk and his mother but Zerk found by their sister Sissy. When the three meet up late in this second volume, it’s an explosive confrontation.

In the meantime, the Snake Lord is back, but stuck in the form of a radish (don’t ask, Doug’s not explaining) and manipulates events to bring about the Spell of Spells, using the Blakk Mudd to turn everyone in the city into Lizzarks, cementing his rule. Of course, Herk and his newfound magical abilities, stand between him and victory.

The book moves along at TenNapel’s usual frenetic pace, mixing action with comedic bits, and never lingering too long on one set or set of characters. It moves quickly which is probably why his work does so well with the 8-12 year old it’s aimed at.  His visual design, aided by Katherine Garner’s excellent color work, no doubt entices readers. The finale between the bestial Megasloth and the Snake Lord’s avatar is pretty cool.

As with most Graphix series, I feel there need to be recap pages since readers may not recall key details or characters when there’s a year between volumes. TenNapel does fill in the background in the book’s first third so does better than some of his compatriots.

On the other hand, like the other series, there’s a cliffhanger so it’s not a complete story with several threads leaving readers hanging until 2017. For the price, there should be a more complete tale and fewer threads.