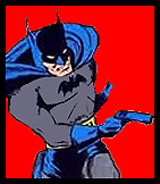 In February 2002, almost twenty-one years ago, DC published a Batman graphic novel that I had written called Batman: Seduction of the Gun. It had its genesis two years earlier when John Reisenbach, the son of an executive of Warner Bros., was shot dead while using a pay phone. DC execs, themselves struck by the senseless act of violence, decided to address the issue of gun and gun-related violence in a special book. Batman was selected as the character best suited for such a story as he has witnessed his own parents shot to death when he was just a boy as part of his mythology.

Our own Dennis O’Neil was the editor of the Batman titles at the time and he approached me as the writer. I had worked with an anti-gun lobby at one point so he knew I was already conversant with the issue. Neither of us wanted to create just a screed against guns. Denny was clear: it first and foremost had to be a good story. What we wanted to say could be layered in but the story itself came first.

I agreed wholeheartedly. As I’ve said elsewhere, I prefer to write questions rather than answers. I believe in having a point of view, especially when writing on an important issue, but I prefer to lay the matter out (as I see it) to the reader and let them come to their own conclusion.

I also did research and found out that, at the time, government statistics suggested that one of four guns used in criminal acts in New York City (where the weapon was recovered) were bought in Virginia. It was one in three for Washington, D.C. Gangs from along the Atlantic Coast came into Virginia to buy guns by the dozens as Virginia had the loosest gun regulations perhaps in the nation. I worked all that into the story.

At the time, Virginia’s governor, Douglas Wilder, was trying to get a very mild gun control measure passed. It would limit gun owners to purchasing one gun a month. You could have belonged to the gun of the month club and still been legal. He heard about Batman: Seduction of the Gun and bought a bunch of them. He placed an issue at every legislators desk and issued press releases how even Batman was talking about the Virginia gun laws. The measure, against all odds, passed.

So – what has happened in the almost twenty-one years since Batman: Seduction of the Gun was published? Guns are more prolific, there have been more shooting in schools (as was depicted in the story), and Virginia repealed the One-Gun-A-Month law last year. The book could be published again today and, aside from a few continuity changes, be as relevant as when it was published.

All this has come to mind not only in the wake of the shooting of the children and teachers at Sandy Hook, CT, but in President Obama’s recommendations this week on gun violence and the NRA’s and the Right’s somewhat hysterical over-reaction to it. Comparing Obama to Hitler, Stalin, and Pol Pot because of these recommendations? Saying that Martin Luther King, Jr, would have sided with the gun nuts? How do you even start to have a reasonable conversation about guns and gun violence when it begins at that level?

The book was and is controversial. Friends and relatives who are gun enthusiasts hate it and have told me so. However, it is not, in my view, anti-gun. It does not, as I do not, call for outlawing guns. Aside from the Second Amendment debate, I think a prohibition on firearms would be about as effective as the prohibition on alcohol was or the prohibition or marijuana is now. It would just create a new revenue stream for the mobs.

Allowing military style assault weapons and 100 bullet clips, however, makes no sense to me, either. There are those who claim that the real intention of the Second Amendment was to fend off the Federal government. They are delusional. That was written when the gun was a musket. Today? Anyone who thinks their horde of guns is going to deter a government with guns, planes, ships, and drones is having a Red Dawn wet dream. No Amendment is absolute; you cannot libel someone, or shout “fire” in a crowded theater with the intent of starting a riot, no matter what the First Amendment says.

In the story Batman says, “No law passed can change the human heart or open up a mind that is closed. We must give up the guns in our hearts and minds first.” Art is one of the ways you reach hearts and minds. Story can do that, I believe. I look at things twenty plus years since the book was published and I have to wonder.

My hope is that someday Batman: Seduction of the Gun will be regarded as a quaint curiosity; my fear is that it won’t.