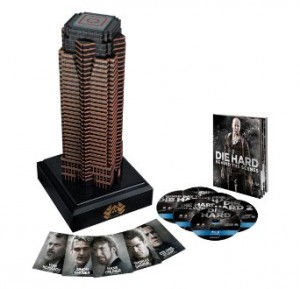 Given its setting during the Christmas season and with “Let it Snow! Let it Snow! Let it Snow!” playing as the credits rolled, Die Hard rapidly became a beloved Holiday classic. So, it’s no surprise to see 20th Century Home Entertainment kick off the Holiday gift giving season with the release of Nakatomi Plaza: Die Hard Collection. All five films in the series along with a bonus disc are packed into the base of a plastic replica of the famous locale of the first film. The structure measures 15″ high, mounted on a base which measures 7 1/8″ square and will stand proudly atop your mantle or bookshelf, a reminder of the series; enduring popularity despite the premise wearing thin with each installment.

The first, with Detective John McClane (Bruce Willis), attempting to stop terrorists led by Hans Gruber (Alan Rickman) from killing everyone at a holiday part attended by his ex-wife (Bonnie Bedelia), is riveting, taut, and filled with some wonderful human moments from the major characters. McClane is world-weary everyman merely trying to survive, risking all to save the woman he still loves, encouraged by a lone cop (Reginald VelJohnson) via walkie-talkie. 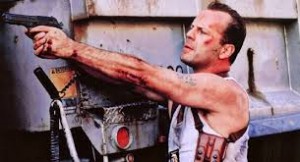 Adapted by Steven E. de Souza and Jeb Stuart from Roderick Thorp’s Nothing Lasts Forever and The Detectives, the film was expertly directed by John McTiernan. The critical and box office success led 20th Century Fox to order up a sequel.

Set in a deserted airport terminal, McClane is called to do the impossible a second time and with less satisfying results although it was nice seeing Dennis Franz play a different kind of cop.

The third installment followed the then-popular trend of mismatched buddies and they wisely paired Willis with Samuel L. Jackson, playing a different kind of everyman. They ran from one end of Manhattan to another, avoiding a sniper who turned out to be Gruber’s brother (Jeremy Irons), seeking revenge.

The last two focus more on John and his children, one at a time, in increasingly hard to swallow premises, made good only by the interplay between father and offspring. 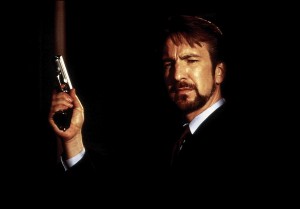 So, if you already own either the wonderful Die Hard Collection, Die Hard: 25th Anniversary Collection or the Die Hard Legacy Collection, do you need this one? Well, do you have room for the tower? Do you want the bonus disc with an hour of stuff? The box containing the discs also comes with a 32-page booklet with some BTS photos and there are collectible cards featuring the antagonists.

Decoding Die Hard (1:47:01) contains seven featurettes: Origins – Reinventing the Action Genre; John McClane – Modern Day Hero; Villains – Bad to the Bone, Sidekicks – Along for the Ride, Fight Sequences – Punishing Blows, Action – Explosive Effects; and, The Legacy – The Right Hero for the Right Time. All of these are repurposed from the Die Hard: 25th Anniversary Collection.

The collection in one form or another is well worth having as Bruce Willis is always fun to watch regardless of how preposterous the premise.