Molly Jackson: NYCC is Bursting at the Seams 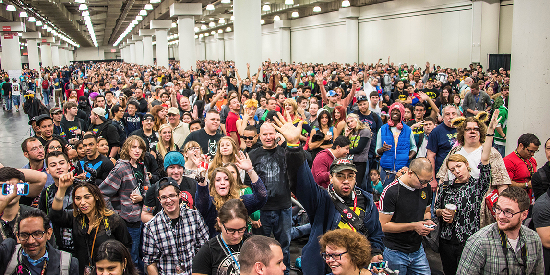 Unless you are living completely off the geek grid (in which case, welcome back to civilization), you know that this past weekend was New York Comic Con. It was NYCC’s 10th year and over the past decade it has grown to one of the largest comic cons in the world.

I spent all four days at the convention, from open to close and occasionally even later. My one word summation is “OWWWWW.” Lots of walking and standing on concrete while carrying heavy books is equal to “OWWWWW” – and then some.

The biggest takeaway from NYCC for me is how big it has really become. It was wall to wall people. All ages, all groups just filling this too small venue for four days. In fact, it was the thing most people talked about. It replaced weather as the small talk of choice. Crowd management became a huge safety issue as the large mass of people made it almost impossible to move quickly.

With the growth comes a lot of perks though. More companies need to do something exciting to get your attention. DC Comics had Jim Lee signing three days in a row, Dark Horse had Frank Miller signing, and comiXology had paper copies of some digital only titles. Booths like DC and Image were telling people were to get their books signed by creators in Artist Alley. Some select panels were shown at the Hammerstein Ballroom a few blocks away. I predict as the area around the Javits convention center develops, we will see more and more convention events happens off-site.

Growth also meant most panels were packed. Some were insanely popular and some were just a good spot to sit down. (Chairs were at a premium all weekend.) I like to believe that this means a tired person got to test the waters on something new and maybe found a new book/tv show/website to try.

I remember when NYCC just used a portion of the Javits, and there might be a different show going on at the same time! Now the place is bursting at the seams with all the booths, creators, and cosplayers. Every year it morphs into something a little different but always bigger. Hopefully we can all keep up with the growth.