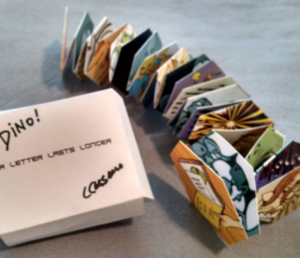 I’ve said before that, despite liking to attend all flavors of fandom and comics conventions, including (clearly) the media guest-focused cons, I really love Baltimore Comic Con because it has stayed so focused on comics and comics creators. I’m happy to report that this has not changed.

I had a great time in Baltimore this year, doing some of the things that make me happiest at comic cons, like walking the exhibit hall and wandering Artist Alley to see what new things old friends are up to, meet folks whose work I know but whom I’ve never chatted with, and flip through the work of creators I haven’t ever encountered before. Amongst the fun things I discovered were this nifty accordion-style comic by Christa Cassano and Dean Haspiel; a gorgeous limited edition coloring book by Charles Vess, whose work I’ve loved for a long time but who I’ve never had the pleasure of meeting before; some great art and collaborations by Tony Moy and Nen (I want Tony’s Vitruvian Totoro woodblock print so much!); these excellent interlocking covers for Amazing Spider-Man #17 and Spider-Gwen #3 by Mike McKone, which I hadn’t previously seen; some new pieces from Francesco Francavilla, whose work I never tire of; and this print of Poison Ivy by Tom Raney.

I also enjoyed watching the always-talented Barry Kitson work as he completed a striking She-Hulk commission; getting to know writer Amy Chu; running into longtime friend and artist Kevin Stokes, who I didn’t even know was going to be at the show; and catching up with other great talents like Cully Hamner and Clayton Henry. And of course it’s always great to hang out with my fellow ComicMixers, and this year I was delighted to finally get to chat in person with John Ostrander, whose work and columns I always enjoy. Good times!

An event unique to this year that I was able to attend and had a blast at was the opening of the exhibit “75 Spirited Years – Will Eisner and the Spirit” at Geppi’s Entertainment Museum. I hadn’t been to the museum before, and it was really fun to walk around through all of the exhibits; and especially fun to be told stories about certain Eisner pieces by Denis Kitchen, cartoonist, publisher (of Eisner and many others), and founder of the CBLDF; and by Diamond Comic Distributors founder Steve Geppi himself. It was also great to see the covers current artists such as Mark Wheatley and John K. Snyder III had done as interpretations of a concept sketch that had been created by Eisner but never before finished, which were on display; and they were also on hand to sign their work.

I also really enjoyed another staple favorite of my BCC experience, The Harvey Awards, hosted this year by the heartfelt and engaging Vivek Tiwary, creator of The Fifth Beatle (a signed copy of which we received in our swag bags along with many other great selections, yay!). It’s always a pleasure to attend and see the industry honoring its creators (and shout-out to Mark Wheatley for his Harvey’s art and work on the media presentation for the ceremony); and of course the afterparty ain’t bad, either! It was fun to sit next to first-time Harvey winner Chad Lambert and experience his reaction to winning, to chat with BCC Guest of Honor Mark Waid (and covet his awesome Legion ring), and afterwards, to nerd out with Vivek, catch up with the likes of the super-nice Thom Zahler, hear some great industry stories via Dirk Wood and Paul Storrie, chill with fellow comics journalists like Heidi MacDonald; see Charlie Kochman’s historic Jules Feiffer button live and in person; and more. So glad I could make it, and congratulations to all of the award-winners this year!

Despite enjoying the focus on comics guests, I was still excited to see Baltimore hosting very quality media guests  – i.e. Paul Blackthorne, Katie Cassidy, Ming-Na Wen, Edward James Olmos, and Raphael Sbarge. It was cool to see them at the show, and the panels were very entertaining. I hope they had a great time at the con, too, and decide to come back again!

And until then (or next week!), I hope everyone who was at Baltimore Comic Con with me can catch up on some rest (I know I need it); and Servo Lectio!