Joe Corallo: Eddie, Are You Kidding? 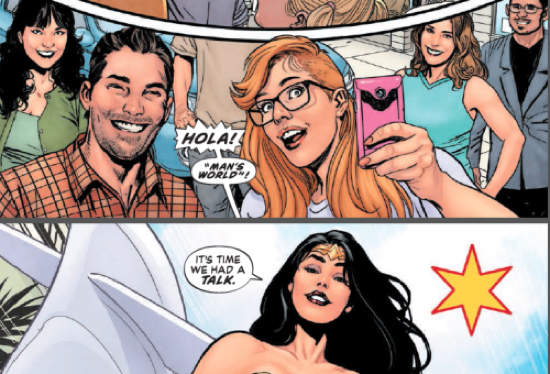 A lot has happened recently at DC Comics. They’ve announced plans for their Rebirth which drew mixed reactions – including from myself a couple of months back. They went on to announce a talent workshop with the idea of being able to bring in some fresh faces in comics to help breathe new life into their properties. Then earlier this month they announced a new imprint called Young Animals headed by Gerard Way, which I and many other people praised. Things coming down the pipeline from DC Comics seemed to be showing promise and certainly the return of titles like Doom Patrol have me excited.

First, news broke that Shelly Bond, Executive Editor of the Vertigo imprint who had been with the imprint since its inception, had been let go as a result of “restructuring.” Vertigo editors will now be reporting directly to the top brass at DC. Many creators who have worked with her expressed sadness in seeing her go and wished her luck in her future endeavors, which is expected. Then, something slightly less expected happened.

Not long after the Shelly Bond news broke, a discussion began on Twitter revolving around why DC would let go of an editor beloved by many while keeping an editor on board who has a history of HR problems and had openly engaged in public sexual harassment. The person in question was outed as Superman group editor Eddie Berganza.

The Outhousers were one of the first to report on this. They pointed out how Bleeding Cool reported on his very public harassment of a woman at Wonder Con in 2012 that led to a demotion shortly after. Recently, Janelle Asselin (as reported in The Outhousers link above) stated she had filed a complaint with HR about his behavior back in 2010 (she originally stated 2011 then corrected that in her tweets), that DC to her knowledge did nothing to remedy the issue, he got promoted and it helped prompt her to leave the company. We not only have her word to back up this claim, but the timeline also fits with the editor credits in the comics that were coming out. It’s important to note that no one from DC Comics as of the time I’m writing this has denied the claims made by Bleeding Cool or Janelle Asselin.

Additionally, other creators like Sophie Campbell have named Eddie Berganza directly as a reason she turned down a freelance gig on Supergirl. Others have come out saying that Greg Rucka has agreed to return to Wonder Woman only if he didn’t have to work with Berganza, and it appears that Berganza will not be editing the title but rather the Bat family group editor will. I have not seen any statements directly from Greg Rucka to back up if that is the full story. Additionally Alex de Campi has been cited as almost naming Eddie Berganza, and the person and their title that she describes in her piece linked does sound like it’s almost certainly Berganza, but stops short of naming him. Other outlets such as DC Women Kick Ass (where I found the above image from as it’s just perfect) have written powerful opinion pieces on this as well.

So why is Eddie Berganza still editing over at DC Comics?

Some may argue that Eddie makes money on the Superman titles while Shelly was heading an imprint that hasn’t been very profitable in a long time. It is true that Vertigo’s heyday was years ago, and DC Entertainment had recently dedicated a quarter million dollars in advertising for Vertigo with little to show for it. However, comparing Vertigo to the Superman titles is hardly an even playing field.

Superman has had other group editors while the titles were doing much better, like Mike Carlin, whose success with The Death Of Superman has yet to be matched, and that was over 20 years ago. And Mike Carlin did go on to become executive editor, like Eddie Berganza did, but certainly Mike Carlin had more to show for it. Eddie Berganza even oversaw a drastic drop in Supergirl sales under his watch back in 2007, in which he’d go on to pen an awkward column blaming the readers, and specifically women readers, for the books poor sales. Oh, and that incredibly embarrassing editorial mess where DC claimed that “Pakistanian” was a language? That was Eddie Berganza, too.

Certainly Eddie Berganza has done some good work though, hasn’t he? Well, yes he has. During his brief reign as executive editor we saw the implementation of The New 52. Love it or hate it, it did start as a financial success and not only created successful series with Geoff Johns and Jim Lee on Justice League, brought back Grant Morrison to Superman with Action Comics, launched Scott Snyder into comic superstardom with his run on Batman, gave Brian Azzarello a mainstream comics comeback with Wonder Woman, but it also brought back many older and experimental titles with surprising success such as I, Vampire, All-Star Western, and Animal Man which launched Jeff Lemire’s mainstream comics career.

Perhaps these successes have elevated Eddie Berganza to being someone that is viewed as an invaluable asset to the company, despite past shortfalls with titles such as Supergirl and editorial disasters like “Pakistanian.” The New 52 also saw the diminishing of the Vertigo line as titles that previously may have ended up there such as Swamp Thing and Animal Man went back to the main DC universe.

This is not written as a defense of the behavior being called into question. It’s just to highlight why he may still be there outside of legal reasons like his contract which may or may not be hard to do anything about, we don’t know. As Heidi MacDonald highlighted at The Beat last week, the idea that Eddie Berganza has blackmail on anyone is simply not true. However, Heidi did find that several sources confirmed to her that there was at least an informal policy that no women would work with him physically in the Superman office. Women were still able to work freelance on the books. This is a shocking and disgusting revelation, but also as it was a seemingly informal policy it’s hard to tell if any legal wrongdoing was actually done by this, and if women were denied equal opportunity. I suppose we’ll have to see if people come forward on that one way or the other.

Everything above this are the facts and insights from people close to this issue or have sources close to it. To help you understand where I’m coming from and what’s informing my thoughts on this, I’d like to tell you about some of my experiences which – to be clear ­– have all been outside of the comics community. Not because I want to, but because I think it’s important.

Over the course of my life I have experienced cat calling, including being cat called while on the phone with my grandmother as I walked down the street. I have had countless unwanted advances and I’ve been the victim of sexual harassment and sexual assault. I’ve been flat out asked if I’d be interested in sexual services for money, been groped, and more. I’ve been told by friends, good friends, about how so-and-so is just “handsey” or “that’s how they get when they’re drunk” or “that’s just their sense of humor.” I’ve way more often than not have been confronted with the notion that I should really be reflecting on my behavior before I jump to conclusions. That is not okay. It wasn’t okay years ago, and it’s not okay today.

I don’t like talking about this. Actually, I really hate it. I get anxious just typing this and knowing other people are going to read this. But it’s important for people to know that these things do happen. It’s important to understand that people allegedly committing sexual harassment or abuse aren’t a monolith. They are single, in committed relationships, have kids, have a loving family, have great jobs, great friends, they may know you, they may not. They aren’t everyone, but they could be anyone.

Pressing charges or suing aren’t always options. Just because I didn’t call the cops to have to sit there and be asked demoralizing questions doesn’t mean I wasn’t demoralized. Just because I didn’t decide to go into a long drawn out lawsuit to get my name dragged through the mud or worse doesn’t mean someone didn’t do something really shitty to me or anyone else. Dismissing victims for not pursuing legal action is narrow minded and needs to stop. And it’s certainly not appropriate with respect to Eddie Berganza, should these allegations bear out.

I’m writing this because workplaces need to be safe spaces. If your company claims that diversity is important, that company has a responsibility to make the workplace safe for everyone. Having someone with a reputation like Eddie Berganza’s on staff while the Janelle Asselin’s of the world leave, or the Shelly Bond’s are let go, creates a less safe space. If you aren’t dedicated to making your company a safe space, then any talks about being dedicated to diversity is just that; talk. Which is especially troubling to think about when DC is currently running a Talent Development Workshop. How many women or other diverse creators have seen what’s been going on with DC since last week, seen the lack of a response from DC, and are now thinking twice about applying? How many people are now applying with the thought that if they end up making it far enough to get a freelance gig out of it that they’ll tell DC “just don’t make me work with Eddie Berganza?”

And I’m writing this because we need to keep discussing this. We can’t let this story fade away with last week’s news. We need DC Comics to know and understand that these are issues that are too important to turn a blind eye to. People need to make statements to address what’s going on.

Even if those statements come down to the fact that this is an issue that has been taken care of internally and that they pledge to be striving to make DC a safe space for its staff, it still needs to be addressed to their readers. DC Comics needs to know that things have changed since 2011, and this kind of shuffling around sexual harassers in the company and protecting them will not fly in the future.

I don’t know what the legal issues are for DC regarding this matter. I don’t know what Eddie Berganza’s contract states, or if these allegations have even been investigated. I don’t know if DC is even in a position to do anything about this situation at this time. But I do know that it’s important for us, the readers, to make sure that DC does not put their personnel or anyone else in this position.