Michael Davis: We Were Friends 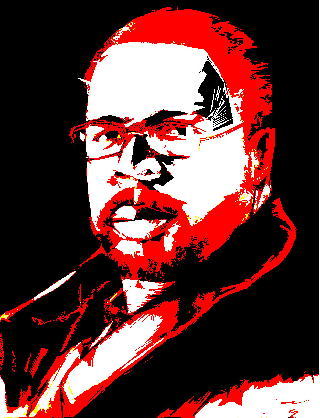 Dwayne McDuffie and I were friends, good friends.

When he first came to LA from New York, I was the one who drove him around for weeks. He didn’t drive. Who does in New York? I took him shopping to the barbershop, comic book stores, wherever. If he needed to go somewhere, I was his ride.

His first Christmas in California, Dwayne was my date for director Bill Duke’s Christmas party. He and Bill became the center of the evening engaging in a conversation so riveting everyone – everyone – who went into Bill’s huge ass kitchen stayed and listened. In the African American community the kitchen is always the center of a holiday dinner, regardless if you live in a small apartment or a mansion.

This was something else beyond the holiday tradition. Dwayne and Bill were engaged in conversation that made black Hollywood stop put down the chicken and listen.

Black Hollywood giving that kind of attention to some guy they never met? Rare.

Putting down the chicken? If I didn’t see it for myself…

Dwayne McDuffie and I were not just friends. We partnered on projects after Milestone. We had projects at Dark Horse and DC. Here’s a kicker. I created those projects, and I brought Dwayne on to write them.

I sold DC President Jenette Kahn a limited series Keith Giffen called the greatest idea since Watchmen. Keith wanted to write it and I wanted Keith to do it but the more I talked to Jenette about the project it became clear to us both this was a Dwayne project if ever there was one.

I told Jenette I was going to ask Dwayne, she was overjoyed, as was I when he said it was a great idea and would write it.

All was good in the hood until the DC editor assigned to the project said “Love this… just not with Michael Davis.” Yeah, I get that a lot. The editor suggested DC buy me out. Dwayne told the editor it was my project and he was not doing it without me.

I took it to Dark Horse and sold it there. Mike Richardson and Dwayne went back and forth as to what the direction the series should take until Mike realized the historical backstory was the story he wanted told. Dwayne didn’t want to tell that story, although I did.

The beauty of Mike Richardson’s insight was the original superhero story was still a doable project. A few years later Dwayne took it back to DC and for a while it was a go, until it wasn’t. This was the when Dwayne was retooling the Milestone and DC relationship and there was real talk and excitement of Milestone entering the DCU.

The project was at one point considered the initial starting point of the combined universes. That Milestone reboot didn’t happen and although there was some movement on the project even after Dwayne passed, the New 52 prevented any further talks. DC was all about the New 52 and this did not fit.

It’s important to me to get these events into the public record because of the narrative forming that erases my contribution from Milestone’s history and left unchallenged that narrative will become truth to most. It’s only a matter of time before Dwayne McDuffie’s problem with Michael Davis bullshit makes its way to a black comics forum. All it takes is someone pointing out I didn’t attend his funeral for a senseless rumor to become a certainty to the sheep who live for such trivialness. After a million sheep blog it so, it becomes so.

I didn’t not attend his funeral, not because there was an issue between Dwayne and I but because I decided to stay with a friend who was asked not to attend. I stood by my friend, I always did.

Those who spread poison about me should understand by now I can prove each and everything I say and just as easily disprove what they say. I see things clearly beforehand because I’m smarter than they are.

They will simply look at this preempted strike as just another stroke of luck on my part.

I’ve been betrayed, stabbed in the back, lied to and about, I’m depressed, alone and if not for the kindness and love of some friends most likely I would be dead. Thinking I’m lucky makes “stupid” too polite a word to use on them.

However, I can not be brought, I’ve been jailed, I won’t be silenced nor controlled. Unless you kill me the truth can be proven. I keep everything, forget nothing, and fear nobody.

The day before he died, Dwayne emailed me. He wanted me to see the prototype of the adult Static action figure. Keeping in touch with an enemy especially from your hospital bed isn’t something people do. They do that for friends.

Ain’t that the truth?