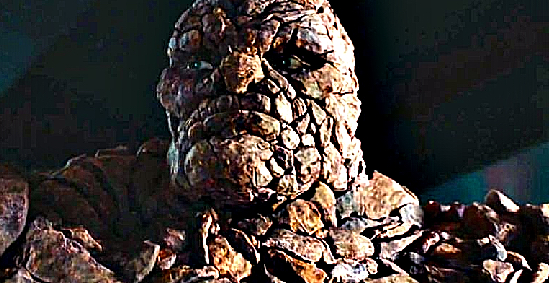 The newest Fantastic Four movie disaster answers one question, but raises at least one other.

From the menorah conveniently planted in a background shot, we learn that Ben Grimm was indeed Jewish. But from all of the later scenes featuring The Thing, we find ourselves asking the question “Was Ben Grimm’s mohel a raving lunatic with gardening shears?”

This is because The Thing is naked throughout the movie. He didn’t even call Fin Fang Foom to borrow some undies. He should have. Then he would have had an excuse to walk out on this remarkably tedious motion picture. In this movie, The Thing has no, ahh, man-thing.

That wasn’t the worst part and, to be fair, it wasn’t the best part either. It was just as boring as the rest of this movie. There were worse elements. A story with so many holes you’d think you were driving down Manhattan’s FDR Highway. A lead cast that would have been better deployed in an adaptation of Power Pack. A Doctor Doom so poorly designed you’ll believe Galactus looked better in Rise of the Silver Surfer, the previous Fantastic Four film fiasco.

Worse still, and, actually the worst thing to happen in a superhero movie in over ten years…

Jack Kirby’s name was nowhere to be found!

Stan Lee was noted as an executive producer. This was a contractual honorific, so as far as I’m concerned neither Stan nor Jack were mentioned. They certainly were not credited with creating even the characters.

I have a special connection to the property. Fantastic Four #1 was the first Marvel comic I ever bought. Yes, that’s the first Fantastic Four #1. Didn’t you read last week’s column? Anyway, I had just turned 11 and I had never, ever read a comic book that was half as… fantastic. It strip-mined my sense of wonder. I reread it immediately. And then, I read it again.

O.K. So I’m a fanboy. They didn’t make this current Fantastic 4 movie (that’s how it’s spelled in the credits) for geriatric fanboys. They made this movie for people who have been shooting cocaine for a week and need something to put themselves to sleep. The best part of this movie was the popcorn and, like the movie, it was overpriced.

Here’s the plot: a bunch of kids invent a machine that causes the audience to immediately zone out. The end.

That Roger Corman-produced movie from a quarter century ago was Citizen Kane compared to this new waste of CGI. The Corman film is vastly superior in this release in at least one respect.

(Thanks to my pal Danny Fingeroth for letting me test some of this out on him.)