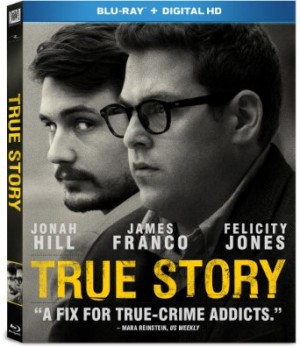 The old Broadway song goes, “Two lost souls on the highway of life“and that certainly describes Christian Longo (James Franco) and Michael Finkel (Jonah Hill) in the thriller True Story. We open with Longo hiding in Mexico, wanted by police for the death of his wife and children, but avoiding arrest because he’s masquerading as Finkel, a reporter for The New York Times. Finkel, though, has issues of his own, having been accused of fabricating a story by writing about one character who was actually a composite of several sources.

When told of Longo’s eventual arrest, Finkel is curious as to why he chose him, of all people, to impersonate and so begins the meat of the fascinating narrative. Available on a Blu-ray combo pack from 20th Century Home Entertainment, the film is an interesting two man character study, leaving you wondering as to each person’s sincerity and even sanity.

The two men begin to meet and talk in Mexico, leading to a symbiotic relationship as Franco agrees to tell his story in exchange for writing lessons from the journalist. Their exchanges are taut, with a wide range of emotions on display, from suspicion to trust to friendship to apprehension.

For Finkel, he’s hoping for redemption while Longo is in for the fight of his life as he is extradited to America and stands trial for the horrendous crimes, leaving the viewer uncertain if he committed the crimes or not. The journalist takes their voluminous correspondence and gets a book deal, his road back to relevance. But everything is not as it seems and rather than spoil things, let me just suggest you rent or buy the video for your own edification.

The lead performances are strong and the two men are comfortable with one another so their exchanges ring especially true. While some of the dialogue by screenwriters David Kajganich and Rupert Goold, who also directed, isn’t the strongest, they make the most of their moments. For his first feature, Goold does a nice job with keeping a talky story visually interesting. Since this is clearly about two men, it was seemingly decided they needed some female presence so enter Finkel’s girlfriend Jill Barker (Felicity Jones), for a few scenes including one dramatic confrontation with Longo. But it all feels unnecessary.

What makes this all the more interesting is that it is based on Finkel’s book of the real world events that inspired the film. That’s right, this all happened.

The AVC encoded 1080p transfer to 1.85:1 is visually just fine along with the lossless DTS-HD Master Audio 5.1 mix so watching this is a pleasure.

Since the movie did well at Sundance but not so well in general release, we get just some perfunctory special features. Goold offers up some enthusiastic Audio Commentary for the entire film as well as some interesting explanations accompanying the Deleted Scenes (16:44). Then there are an assortment of promo features: Mike Finkel (3:33), Who is Christian Longo? (3:56), The Truth Behind ‘True Story’ (4:03), and The Making of True Story (5:26).