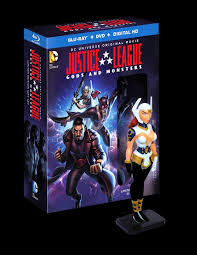 Warner Home Entertainment has seemingly acknowledged that mostly in-the-know fans watch their direct-to-video offerings because if you’re not a fan, the current release, Justice League: Gods and Monsters, won’t make as much sense as he previous videos. Essentially, this 77-minute animated film is an Imaginary Story but it has the benefit of being the product of Bruce Timm’s brilliant imagination.

Timm has absented himself from the DC Universe for a while, recharging his batteries, and he’s back in an energetic and refreshing take on the concept of heroism. The film is chock-full of cameos and references to people scattered throughout the company’s 80 year history with many a creator deservedly getting their names in the end credits.  Timm has reteamed with producer Alan Burnett and the two share story credit with Burnett writing the final script. 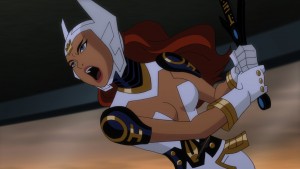 Imagine if you will: General Zod sending his son (voiced by Benjamin Bratt) to Earth moments before Krypton exploded. In Gotham City, Kirk Langstrom’s (Michael C. Hall) experiments with bats has turned him into a power man-bat closer to a vampire than a hero. On Apokolips, Bekka (Tamara Taylor), Highfather’s granddaughter leaves her war-torn world to come to Earth. From their tower in Metropolis they have formed the Justice League where they serve and protect but on their terms.

While arrogant and far more violent than their traditional counterparts, they are not idiots so when scientists are killed in a series of accidents, they investigate. When giant robots, mimicking their abilities, are seen committing the crimes, the press blame the JLA and the hunt for the heroes begins in fervid earnest, led by Steve Trevor (Tahmoh Penikett) under orders from President Amanda Waller (Penny Johnson Jerald). And here’s where the story really impresses me, the motivations behind the villain. I won’t spoil it for you, but the story has heart where so many other offerings in the series have been cold, action-packed adventures. 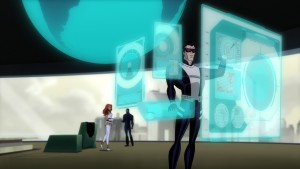 Where’s Lex Luthor you wonder? He’s above it all. Literally. From his orbiting space station, he has been suffering with Lou Gehrig’s disease and is confined to a wheelchair, making him a cross between Stephen Hawking and Metron. It’s a really interesting interpretation of the man and his exchanges with Superman are refreshingly non-monomaniacal.

As Batman leads the investigation, we are treated to well-spaced out flashbacks to the trio’s origins which provides us with other glimpses of this almost familiar universe and timeline. Supporting players from Lois Lane (Paget Brewster) to Jean Loring Palmer (Andrea Romano) make appearances enriching the story. 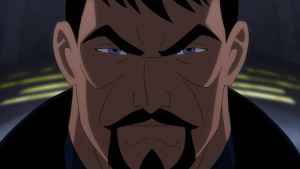 The villain’s reveal and explanations bring the tight pacing to a grinding halt but then we burst into the final act and Sam Liu’s direction may be the culprit. Some things are prolonged, some reveals aren’t as surprising as you are led to be believed, but overall, once the credits roll, you’re left feeling fairly well satisfied. (And if you want more, DC Comics has offered up a ton of tie-in comics.)

This comes in a package containing the Blu-ray, DVD, and digital copy along with a Bekka action figure. As one has come to expect, the 1080p/AVC MPEG-4 video pairs nicely with the DTS-HD Master Audio 5.1 surround track so it looks and sounds just fine.

The extras this time around are a mixed bag. We start with Alternate Realities: Infinite Possibilities (19:00) led by DC Entertainment Creative Director of Animation Mike Carlin, DC Entertainment Co-Publisher Dan DiDio, Timm, Burnett, writer Heath Corson and DC Entertainment CCO Geoff Johns go on at length about the joy of reading and then producing Imaginary Stories. The history could have been better explained but all the expected favorites get touched out without properly acknowledging the modern day version, Elseworlds, started with Gotham by Gaslight.

We have an extended look at the show’s production with Calculated Risk: The Making of Gods and Monsters (24:00), which acknowledges the risk of too much Inside Baseball seeping into the finished product.

Lifted from an earlier disc, you get some additional background on Bekka and her world via The New Gods (22:00) where Carlin, Paul Levitz, Walter Simonson and ComicMix contributor Alan Kistler review the brilliance of Jack Kirby’s Fourth World and its enduring impact on DC Comics.

As usual, the Blu-ray concludes with a preview of the next offering, Batman: Bad Blood (12:00) which will bring Batwoman to the animated universe.

Rounding out the bonus material are “Phantoms” from Legion of Super-Heroes and “Brave New Metropolis” from Superman: The Animated Series.