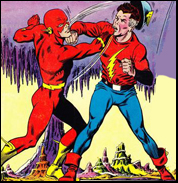 All hands brace for a confession….Yeah, you got me. I admit that all the noise surrounding DC Comics’ reboot or relaunch or reinvention…whatever you call it, all the dust raised by this activity has caused me the occasional twinge. I worked in the comics trenches for a lot of years and some of it I still miss. Not all, oh no, but – sitting with bright, talented, convivial people in a room and doping out stories to tell…that was one of life’s joys and I’m guessing that the stalwarts at DC have spent a lot of time recently doing just that.

But they aren’t the first to redact the company’s pantheon of superheroes. Way back before you were born – most of you, anyway – Julius Schwartz did pretty much the same thing. The year was 1956 (I told you that you weren’t born yet) and comics, and their primary contribution to pop culture, superheroes – they’d been sickly for about a decade, ever since some politicians, editorial writers and assorted busybodies had convinced a lot of citizens that comics were spawns of evil. (To be fair, changing publishing and retail realities had something to do with comics’ decline, too.) As Julie told me the story: he and his fellow editors were having a meeting and someone decided to revive The Flash, a once-popular character that hadn’t been seen for years. Julie’s words as I remember them: They all looked at me and I said, I guess I’m it.

They did, and he was. He didn’t merely produce a carbon copy of the original Flash, though. With writer Robert Kanigher  and artists Carmine Infantino & Joe Kubert, Julie gave the world a new Flash – new costume, new origin, new identity. He left the original concept intact – the world’s fastest human – and altered everything else to make The Flash and his world reflect this, the world we non-fictional beings in habit. Julie and his merry men taught those of us who followed them how to do it: leave whatever made the character popular and unique alone, and modernize the rest.

There was no particular fuss over Julie’s work, back in 1956. For him, it was just another day at the office. The network of fan publications was at best just a’borning, as were conventions, and websites, like this one, weren’t even science fiction because, as far as I know, nobody had even thought of them. Sure, some dedicated readers may have reacted, but the world at large…yawn. And that may have been where Julie had an advantage over his editorial descendants.

Imagine doing this complex task with hordes of the curious looking over your shoulder, waiting to see if you fail, some of them, human nature being what it is, maybe hoping you’ll fail. And of course, regardless of how well you perform, a lot of your audience will find fault because they’ve been establishing an emotional attachment to these characters for years – for decades? – and any significant changes is going to seem…well, dammit, wrong! Pretty daunting, huh?

I haven’t read any of the new stuff yet. Have I just convinced myself that I shouldn’t?

Recommended Reading: The Ten-Cent Plague: The Great Comic-Book Scare and How It Changed America by David Hajdu