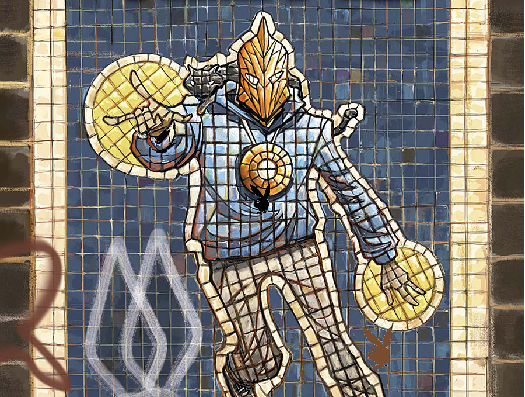 For the past several weeks my friend and comrade Paul Levitz has taken to the so-called social media to promote his brand-new comic book, Doctor Fate.

Of course, this is his right and more power to him. But I don’t recall Paul doing so much promotion for his work during a writing career that goes back to when he was a small child. Now that he’s well into being a small adult, I’m taking this effort as a sign of his pride and enthusiasm for his latest project. I would have read this book anyway as the lead character has long been a favorite, but I really wanted to see why he’s so enthusiastic this time around and so the book took the top position on my week’s reading pile. 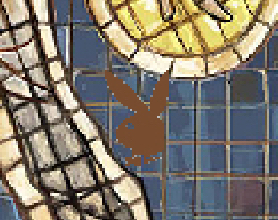 Doctor Fate #1 is capped by an interesting and unusual mosaic-pattern cover, drawn by interior artist Sonny Liew in DC’s newer, looser style. If the idea of the cover being drawn by the interior artist confuses you, there’s a variant cover available if you can wrestle it from your retailer. I stared at it for a while, found the hidden bunny rabbit head, and moved inside.

The story is a continuation from the Sneak Peak giveaway made available last month, although if you haven’t read that and you’re not interested in reading it on DC’s website, that’s cool. The story makes perfect sense without it. It is properly apocalyptic, with Anubis, the jackal-headed Egyptian Lord of Dead with the Greek name, preparing his own personal sequel to the big wet Noah Event. Only one young Brooklynite of Egyptian heritage can save the day – or so we presume; it’s a continued story and not a mini-series – and he wants no part of it. He’s about to start pre-med classes and he’s got a girl friend or something. But… dare I say it… Fate has other plans.

I’ll admit I was disappointed that they fussed with the traditional Doctor Fate costume. This did not come as a surprise as I actually pay some attention to the New New Fifty-Two as I eagerly await the inevitable Newer Still New New Fifty-Two reboot. But, who knows, maybe I’ll get lucky and we’ll see some sort of return of what I find to be one of the most interesting and distinctive superhero costumes of the past 75 years. Right now, we get the helmet – to be sure – and the amulet, which seems to have been stolen straight out of Tony Stark’s chest. Not to worry; Tony’s got plenty more.

Paul is one of those writers who carefully plots out the inter-relationship of each story element. This is what made him a superlative Legion of Super-Heroes scribe, a trait he shared with his predecessor, Jim Shooter. It’s clear that he put a lot of effort into this story: damn near every I is dotted, every T is crossed, and the tale is properly nuanced – not an easy trick in a story that, otherwise, could suffer from originitis. To me, it seems Paul is playing to the strengths of his collaborator, the aforementioned Sonny Liew.

Liew has a fluidity of style that makes the story move at a brisk pace. A veteran of Vertigo and Marvel and sundry indy projects, I am told the two met at a toy fair in Singapore. Sonny went to school there. He also went to school in Cambridge, England and Providence, Rhode Island. He’s quite the bon vivant. He’s also one of the best storytellers I’ve seen in a decade.

Doctor Fate #1 places the oft-revived hero on the top shelf of current mainstream superhero comics, right where, my inner fanboy screams, he belongs. I hope DC waits a long, long while before the next reboot.