Mike Gold: Bizarro – Who Am Him?

One of the most enduring DC Comics creations, Bizarro has been with us since 1958 – either debuting in the Superman newspaper strip, according to editor Mort Weisinger, or in Superboy #68 according to where most baby boomers first found him. Either way, that original Bizarro was quite a different being than he is today. In fact, the personality, appearance and modus operandi of Superman’s brother-in-harms seem to differ with just about every use. 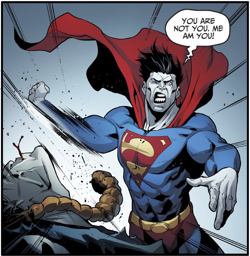 Originally Bizarro was a sympathetic character, the result of an experiment that didn’t quite work. Half-Frankenstein’s monster, half-Quasimodo; he was a manufactured man who grew the most human of hearts over the course of his initial appearance in both the Superman strip and the Superboy story.

That Superboy story sold like a sumbych. Editor Weisinger started putting him in every Superman family title he could – cross-editor crossovers didn’t exist in 1958, except for the Superman/Batman stories in World’s Finest. In less than three years Adventure Comics cover-featured an ongoing Tales of the Bizarro World series.

In this series all the pith was removed and the creature and the stories were played for laughs. That wasn’t hard, as Bizarro’s superpower was to be and do the opposite of what the “normal” did. By now he had his own planet populated by equally imperfect duplications of other beings from both the reader’s universe and DC’s. Bizarro even introduced the Bizarro President Kennedy to the Bizarro Marilyn Monroe. This happened years before we found out that the real Kennedy and Monroe were making the beast with two backs right there in the people’s White House. 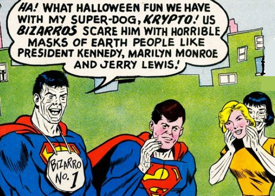 Weisinger was a very, very well-connected man and he had many friends in high places. In 1976 I asked Mort if he had inside information at the time. He glowed, looked at me and said: “You know what they say.” I replied “Ummm… If I told you I’d have to kill you?” and Mort said “That’s right.”

You can’t keep a good creature down, and Bizarro has reappeared with a frequency exceeded only by The Joker. But, as I noted at the outset, there was no external consistency to the character. He was a goofy monster, he was a confused construct, he was (most frequently) a monster who acted as a super-villain but with the motivation of a guy who simply does the opposite of what Superman would do. Maybe. 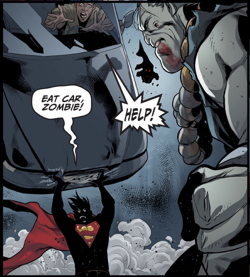 I wish somebody would sit down and read Dick Briefer’s Frankenstein, published in the 1940s by Prize Comics. Many reprints abound; to start I’d recommend the one Yoe Books and IDW did in 2010. If you’ve never heard of it, it may very well be the best American comic book you’ve never heard of. Briefer is in the same league as Eisner, Cole and Toth, and he managed to tell a great many stories without tripping over the concept. Frankenstein was sympathetic and heroic, pithy and funny, and always a joy to read.

I like Bizarro, particularly that original newspaper comics story. And I like many of the various interpretations of the character that have come our way in the subsequent 58 years. Some are truly brilliant.

Despite DC’s multi-purpose guardianship over the decades, Bizarro has become an accepted term in the English language. The term “Bizarro World” is often used as a metaphor. It’s even in most computer spell-checkers.

And, really, who among us can’t identify with a character is constantly misunderstood?