Mindy Newell: The Problem With Diana 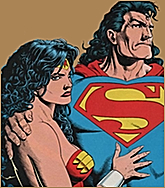 Over at www.geekmom.com, Corinna Lawson’s June 21st Cliffs of Insanity column once again wondered why Wonder Woman doesn’t get any respect; this was instigated by the news that DC is producing a new comic, Superman’s Girlfriend Wonder Woman – the title is mine – which will “focus on the relationship between the characters.” (Apparently a DC editor considers Lois Lane nothing but a “trophy wife.”) This is occurring, as Corinna rightly points out, “in an environment where women are still fighting for some basic rights, even to the point of having to listen to politicians talk about ‘legitimate rape.’” And, may I add, in which Texas, North Carolina, and ten other states, along with the House of Representatives, have ignored Roe vs. Wade and declared abortion illegal past 20 weeks and making the procedure not only incredibly difficult to obtain, but incredibly denigrating to the individual woman who seeks it.

On June 28th, Shoshana Kessock of www.Tor.com focused on “The Problem with Wonder Woman” in Hollywood, while noting that the Themiscrya Tigress “has recently been dubbed the 20th greatest comic book character by Empire Magazine, and ranked fifth in IGN’s 2011 Top 100 Comic Book Heroes of All Time…[standing] as one of the icons of the comic book world, and has been featured in dozens of comic titles since her debut in 1941. The character has also found success in other media, appearing in a popular live-action television series in the 70s, as well as several animated series (including Super Friends and Justice League).”

Why does Diana not getting her due bother me so much? I guess it’s because I have a personal history with her. Not only was Wonder Woman my first assignment as sole writer, but also I had no clue at the time that I was the first woman to be asked to write her – the only female cornerstone hero of the DC universe.

As I told Gail Simone when she interviewed me for her Five Questions webpage:

“I first worked on Wonder Woman in 1984 or thereabouts – back in the day, I was one of Karen Berger’s ‘fillies’ in her stable of writers in the New Talent Program. I honestly don’t know who suggested it – it sure wasn’t me. I think it was Karen, or perhaps it was Paul Levitz. Maybe it was Marv Wolfman or Len Wein. Anyway, it was about this time when plans were hatching for the [superb, imho] relaunch of Wonder Woman by the absolutely wonderful, nobody-can-touch-his-talent, charming and amazing George Pérez. So the then-current Wonder Woman series was running down – I think there were only about three or four issues le”ft – and I got a call from the editor, Alan Gold, asking me to come in and talk about finishing up the book.

Wonder Woman? Me? Frankly, I was amazed. Also very excited. And flattered.

I didn’t know it was going to turn into such a downer. You see, I didn’t really get a chance to write what I wanted to write. Alan told me – no, decided – what I was to write. He was big into Mayan civilization, theology and myths, and that’s the story he wanted to tell. I think he liked the idea of two great “pagan” civilizations clashing, as Wonder Woman represented the Hellenic Period. But I had no interest in Mayan culture at the time – or was it Aztec? (I still don’t have much of an interest in either of them, except that I know about the Mayan calendar, which ended in November 2012, so we’re all dead – or didn’t you know that?)

But this was my first chance at writing a regular series, plus I was a “nice Jewish girl” who hadn’t grown up yet, so I tried to go along with him – after all, he was the editor, right? But it was a disaster. I was trying, but my heart wasn’t in it, and when a writer’s heart isn’t in, then craft is supposed to take over. Only I was still learning my craft. And I couldn’t spell the goddamn name of the god who was the antagonist, and back then I wrote on a manual typewriter which meant a lot of erasing and White-Out and a lot of putting a fresh piece of paper into the typewriter when the original became too smudgy and too thick with the White-Out stuff.

It got to the point where I not only didn’t give a fuck about spelling the name of the god who was the antagonist of the story, but where I didn’t give a god damn about the whole story. I hated writing Steve Trevor because he lacked the right stuff: he was a nebbish, the perfect pisher, a humiliation in uniform, and a disgrace to the Air Force. I hated writing Etta Candy because she was a stupid fat girl who let men push her around and drowned her inner strength in chocolate.

And as for Diana…