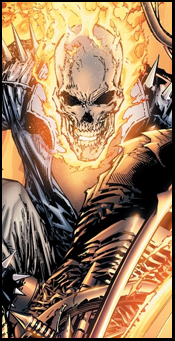 Denny O’Neil used to have a T-shirt that proclaimed “Growing old is not for sissies.” As I get older, the hard truth of that keeps coming back to me. Case in point.

Two days ago, there was an article here in ComicMix about Gary Friedrich who lost his case against Marvel about participation in the monies made from the movie (now movies) of Ghost Rider, which he created at Marvel. Among other reasons cited by the judge, U.S. District Judge Katherine Forrest, was that Friedrich gave up his rights to the character when he signed checks that had, above the signature line, language requiring him to give up any rights to the character.

The name, Ghost Rider, had also already been used at Marvel as one of the Western characters they had – said character, again, being created by Gary Friedrich. Friedrich also had to sign a document giving up all rights – and why wouldn’t he? This was seven years before the first Superman film with Christopher Reeve showed up, six years before George Lucas made Star Wars and showed there was a ton of money to be made off of ancillary rights such as toys et al. You signed those documents because that’s what was necessary to get the work. No movies were being made, no toys were being made, there were no video games – the only money to be made was from the work itself. There was no indie market in those days where you could take your ideas. You made the deal that was there to be made.

The judge had to base her decision on what were the legal facts – and they said that Marvel owed Gary Friedrich nothing. Without Friedrich, however, the property doesn’t exist. From all reports, he’s not in good shape. He could use the money – even a taste.

What is he owed?

Injury to insult department. The judge has not only told Friedrich to stop saying he created Ghost Rider, he was ordered to pay Marvel seventeen grand in damages.

He’s not the only freelancer in this position. Years ago, I saw Gene Colan and his wife at a convention and I steeled myself up to go say hello to someone I thought (and think) was one of the unique great talents in the industry. He was having eye troubles at the time (with which I would come to completely empathize) and he was, to be honest, a little angry and bitter. Like other old pros, he felt cast aside and forgotten by the industry and he warned me to make sure I had money in the bank or find something else I could do. I wish now I had taken his advice more strongly.

This is not to say there are not groups like the Hero Initiative out there who do tremendous work in helping people who have given to the industry but there are financial limits to what they can do. There is no equivalent to a union or a guild in this industry; if you even think of starting one, you’re gone. John Broome, fabled writer in the Silver Age, found that out.

What is owed to any of those who built a company, built this industry, and then got left behind?

I won’t pretend; I’m more or less in that boat and it scares me. I’m luckier than some; with Amanda Waller, who I created, I’ll see some participation for her use in the Green Lantern movie, just as I did for her use in Smallville and Justice League Unlimited. I think that’s fair and, fortunately, legally binding. Thank you, Paul Levitz.

But what about others, like Gary Friedrich, who worked before there was any such notion? There is, as always, a wide distance between what’s legal and what’s right.

What is owed to those who came before, who did the work on which later, more lucrative, works are built? The contracts, the law, says nothing is owed.

Does that seem right to you?

It doesn’t to me.

If you agree, tell Marvel, tell their parent company, Disney, that they owe the creator something, contract or no contract. Fans can do something and it can be effective. Gary Friedrich isn’t one of the big, great names in comics. But he created Ghost Rider and, legally or not, they owe him.