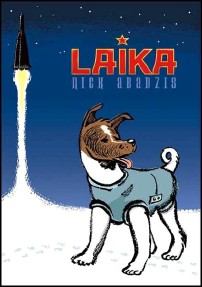 This graphic novel is pretty good just on its own terms, but it’s an excellent object lesson. If you know of anyone who thinks that comics are essentially limited in scope to brightly-clad folks punching each other with great vigor, this will help to expand their horizons. It’s the story of Laika, a Russian dog who was the first living creature from Earth deliberately sent outside the Earth’s atmosphere. It’s an impressively-researched story braiding a fictional back-story for Laika (and several other characters I believe are also fictionalized) with the story of the “Chief Designer” of the early Russian space program, Sergei Korolev. And all that is told in comics, and, I suspect, primarily aimed at the grade 6-12 audience.

I’m not familiar with Adadzis’s work, but the note on him in [[[Laika]]] calls him an editorial consultant who “creates words and pictures for a living and loves both equally.” According to his website, muck of his work has been for children, especially recently, though he did something called Millennium Fever

is a dense book; we start off with a flashback to Korolev’s release from the gulag in 1939, stop briefly at the first successful Sputnik launch in 1957, and then dive back into a long account of the life of a dog. (Who, as we all can guess, eventually becomes Laika.) This graphic novel is about two hundred pages long, and each page has about ten small panels, in shifting grids with occasional snippets of white space. And there’s quite a lot of dialogue along the way, in what I’m tempted to call the Russian manner. It’s not a quick read by any means, and the panels can get quite cramped at times. It’s never difficult to read, but there is an awful lot here. Those who judge books by how much time they take to read should enjoy Laika.

Most of the bulk of Laika is devoted to a program to use dogs to test experimental aircraft; another main character, a woman named Yelena Dubrovsky, comes to work in a kennel, taking care of the dogs. Her bosses report to Korolev on at least some projects, and her dogs are eventually tapped for Sputnik II when the then-head of the Soviet Union, Nikita Khrushchev, demands that the second launch go up almost immediately and that Sputnik II contain a living being.

This isn’t the story of how the Sputniks affected the world, or scared a generation of American kids, or inspired a generation of Soviet kids, or anything large; this is a story focused on Laika and the people she affected. There’s an awful lot of back-and-forth conversations among the dog-program brass and Yelena about Laika, about other dogs, about the program in general, about Sputnik, and so on. (As I said, this is a book that feels long. The fact that they have basically the same conversation three times doesn’t help it feel any shorter, either.)

Abadzis’s art feels a little scruffy to me (like Laika, perhaps?) – his people have odd-shaped heads, and his panels are often cramped. His panel-to-panel storytelling is decent but rarely notable, and there are an awful lot of single-colored backgrounds for my taste. I’m not convinced, also, that he can make faces convey the emotions that he’s trying to, and sometimes he gets in much too close on his strangely-drawn faces.

Laika will probably find its biggest audience where it expects to: among kids who want to (or have to) learn more about Sputnik and the ‘50s space race. For them, the story of a dog will help ease the pain of being educational. For adults, I’d expect this to be particular interest only to space-history fanatics and possibly animal-story buffs.