Mindy Newell: For The Love Of The Game 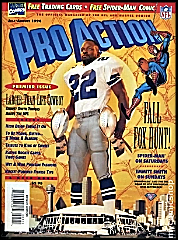 As I write this, the Super Bowl XLVIII kick-off is still 36 minutes away.

I’ve been thinking a lot about football the last couple of weeks. It’s a showdown between the best offensive team, the AFC Denver Broncos, led by Peyton Manning, who has had what may be the greatest quarterback season ever while breaking numerous statistical records, and the NFC Seattle Seahawks, whose cornerback Russell Wilson is the *ahem* cornerstone of the best defensive team of the 2013 season.

It’s also the first Super Bowl in which the physical dangers and complications of the sport on its players have been as discussed and picked over as much as any debate about the game and who is going to win.

This season also saw the NFL going over the top in its security efforts, this year dictating what size pocketbook a woman may carry into an arena – and also offering “official NFL team logo clear plastic tote bags at all club merchandise outlets for only $9.95.” In other words… a baggie! Also in 2013: the wide-spread discovery (I didn’t know, did you?) that the NFL is considered a non-profit organization by the IRS (!!) and efforts to end this status, including numerous on-line petitions and the Properly Reducing Overexemptions for Sports Act – or PRO Sports Act – bill by Senator Tom Coburn (OK, R) and Senator Angus King (MA, I)

I love football because of its personal memories for me. My dad taking me to Yankee Stadium for the first time to see the Giants play the Colts because my mom had to stay home to take care of my sick brother and him explaining the intricacies of the game and coming home to discover that I was even sicker than Glenn, with a 103° temperature. My father pointing out Richard Nixon (pre-Presidency) sitting only a few rows behind us. The family driving down to Princeton to watch the annual Jaycee pre-season game between the Giants and the Eagles. Being jealous of Glenn because he shook Hubert Humphrey’s hand as the Vice-President walked into Yankees stadium to watch the Giants take on the Redskins. Driving up to Yale for the games while Giants Stadium was being built. Tailgating with my brother on a frozen day to rival this year’s winter, when we were almost alone in the stadium’s parking lot, which was an icy, snow-swept tundra with gale-force winds, and determinedly grilling steaks and hot dogs anyway. Taking Alixandra to her first Giants game and having to stand in the tunnel because she was afraid of the rain. Being at the 1986 Giants-Niners NFC championship game with Glenn, watching Mark Bavaro continuing to step forward with five or six Niners on his back. Harry Carson running for his first defensive touchdown and Lawrence Taylor covering him, and after the game, listening to the post-game report, Taylor replying, when asked by Giants sportscaster Bob Papa what Taylor said to Carson as the two ran downfield, “Harry, you sure do run slow for a black man.” (Please, no letters.) The Giants winning their first Super Bowl against the Broncos under Bill Parcells.

So many memories. I could go on and on and have enough for another month of columns.

I love football for the game itself. The beauty of the running backs sprinting downfield, evading the secondary. The splendor of catches made in three or even four man coverage. The excitement of 4th and goals. And yes, for the sheer physicality of it.

And, yes, I love football for the sheer physicality of it.

When I heard that Junior Seau had committed suicide, I was shocked, as was every sports fan. Listening to the news, I flashed back to the first issue of NFL Pro Action, which I had edited for Marvel. That issue included an article, entitled “Pumped!” featured the San Diego linebacker demonstrating some of his upper body workouts. The last paragraph read:

“Lifting weights helps your confidence – knowing that you went to the weight room, sacrificed your time, and concentrated on your strength. When you’ve done this, you have an edge. When I hit the field, I feel confident that if there is a big guy coming after me, I’ll be equipped to take him on. It’s a mental edge, but it helps me gain leverage. If you don’t have that confidence on the field you should be there.”

He started the Junior Seau Foundation in 1992. Its mission is “to educate and empower young people through the support of child abuse prevention, drug and alcohol awareness, recreational opportunities, anti-juvenile delinquency efforts and complimentary educational programs.”

Seau played 13 seasons for the Chargers, later playing for the Miami Dolphins and the New England Patriots. He retired in 2009. He was All-Pro ten times, played 12 times in the Pro Bowl, and made the NFL 1990’s All-Decade Team, and the Chargers inducted Seau into their own Hall of Fame.

And on September 16th, 2012, three months after his death, the Chargers retired Number 55, Junior Seau’s number, in an opening game ceremony.

The words I quoted above were spoken by a man who loved his profession, loved the game, loved being able to play, and loved being able to give back. And later, when it was announced that the cause of Seau’s death was really the chronic traumatic encephalitis (CTE) brought on by his years of playing football, I wondered if, given the choice, if Seau had known the danger and what lay before him, if he would have chosen to play the game for the love of it anyway.

For the love of the game.

I wonder if it’s worth it.

The two-minute warning for the first half has just gone off. Seattle leads by 22 to Denver’s big, fat donut hole.

And I wonder if all players down on that field and watching in the stadium or at home or at a local sports bar, are wondering, will wonder, if it’s been worth it.

Worth it for the love of the game.