Review: ‘Prince of Persia: The Sands of Time’ 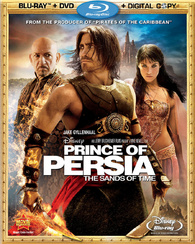 I found myself interested in seeing Prince of Persia: The Sands of Time

entirely based on the trailer, and the engaging banter between Jake Gyllenhaal and Gemma Arterton. Not being a game player, I had no frame of reference and therefore no preconceived notions when I sat down to watch the Disney production.  The visuals, largely CGI-generated, are enticing, with enough period costuming and countless extras to make it feel like a timeless Persia of story and legend.

The movie was considered a disappointment, opening weakly and garnering mixed reviews. Now, Disney Home Entertainment is releasing the film Tuesday as a single-disc Blu-ray or a combo pack. Gyllenhaal’s acrobatics makes it clear he would have been an excellent replacement for Toby Maguire in the second [[[Spider-Man]]] film, as he leaps, jumps, and acrobatically performs as Prince Dastan. While he does not at all look Persian, he also is the most empathic member of the cast, constantly looking at people with gentle eyes.

An orphan whose bravery impressed the King, he was taken into the palace and made a brother to the King’s sons. As we open the film, they have been manipulated to attack Alamut to end their treachery. Dastan, though, discovers Princess Tamnia (Arterton), attempting to hide a special dagger. From that point on, the story becomes a standard high-octane adventure story mixed with the Princess’ spiritual responsibilities. Of course, the twin themes mesh into a noisy climax set at the Hourglass of the world, or whatever it’s called.

The film is populated with stock types, the wise father, treacherous Uncle (Ben Kingsley, phoning it in), cannon fodder brothers — Tus (Richard Coyle) and Garsiv (Toby Kebbell) — and comic relief in the form of a gambler (Alfred Molina) who rails against taxes. Dastan’s greatest obstacle seems to be surviving the central casting figures to defeat the leader of the Hassansins in an overly drawn out set piece.

All the banter that appealed in the trailer was never expanded upon or deepened in the actual film and Tamina rarely acts like a princess or the keeper of a legendary trust. She certainly cowers well, though.

Director Mike Newell seemed to go out of his way to give us anything fresh and original, so scenes were reminiscent of many other genre features or even other video games. None of the characters rise above their roles so the end result is a mediocre popcorn experience.

On blu-ray, the film looks lovely, especially the exterior settings of the various kingdoms. This is one of the strongest video transfers I‘ve seen in a while. The single blu-ray contains one extra: a 1:30 deleted scene while the version in the combo pack also comes with the CineExplore feature. The Sands of Time offers up about two hours of extra material, some 40 behind-the-scenes tidbits about how the film was constructed. The annoying aspect, though, is that you have to literally sit through the film and look for a dagger icon, which triggers that moment’s video tidbit. There’s no other way to access it as there should be which makes it quite vexing. The standard DVD in the combo pack contains the obligatory Making Of featurette, which reuses much of the same material.