Marc Alan Fishman: WWE and A Future For Comics 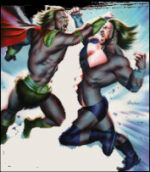 Last Wednesday, Vince McMahon announced the launching of the WWE Network. Suffice to say it was well received by his hardcore fans just as he’d hoped. To use a bit of hyperbole – which all things considered, seems apropos – the self-made millionaire stands to become a billionaire with the launch.

It’s many things, but above all else, it’s a stroke of genius in the modern era of content delivery. Comic companies might want to take note… but I’m getting ahead of myself.

The WWE Network would appear to just be Netflix for hillbillies, but truly those who aren’t in-the-know, and quick-to-judge are missing out the insane deal the WWE is offering. For $9.95 a month (purchased in six month blocks, with a potential discount for year long subscriptions forthcoming), users get access to every pay-per-view since 1985 from the WWE, as well as rival companies WCW and ECW. They also get access to newly created content like countdown shows, reality shows, and plenty of documentaries and retrospectives.

Oh, there’s more. Users get every pay-per-view coming out. At present, purchasing a pay-per-view from VinnyMac sets you back 45-60 dollars, depending on the event, and the quality – SD or HD.

Do the math, kiddos. If the WWE just offered you the pay-per-views at ten bucks a pop, you’re saving anywhere between $440 – $620 a year. But if someone were to offer you an 83% discount, and you were even just a normal fan, certainly you’d find that to be worth considering. Add that insane discount to an increase in content, somewhere around 1900%, and now you’re starting perhaps to see why this is a big deal.

Obviously there are plenty of folks scoffing at the financials of all of this. With an 83% discount on a product, WWE’s PPV buy-rate profits will appear to tank. Vince and family are of course looking for volume profits to achieve the balance. In addition, newly minted subscribers will now be marketed to (in essence) exponentially more than they ever have in the past. This of course creates new advertising revenue streams. Imagine having an audience with decades of trend data sitting in wait, where your product can be hocked to them every single time they decide they want to indulge in their vice. This is internet ads the way companies dreamed they’d exist. Paint me impressed, at very least.

In covering the announcement, Gizmodo said “…[T]hink about what you’d rather pay for: Netflix and its vast but unpredictable movie library and unproven original series? Or the entirety of [thing you love]?” Truly, as I’d said: this may very well be the way to save our always-in-a-state-of-dying medium of comics.

Marvel and DC have set to revolutionize content delivery in the digital realm many times over. They’ve offered subscription services in the past (and may still do) and never once have I heard from fellow comic fans “this is how it’s done!” Instead, too many apps produce access to the same material, forcing fans to choose a vehicle, and then commit to it. Same as iTunes vs. Amazon MP3 vs. Rhapsody, etc. Vince McMahon chose instead to Spotify his industry-leading content library. Could any of you imagine a service that for the price of your books perhaps for a single week… granting you access to decades worth of content, as well as keeping you current on your favorite titles for the month? Could you fathom a service that could be easily accessed on your tablet, desktop, laptop, and/or phone? And dare I dream… what if that service gave you Marvel, DC, Image, IDW, Boom!, Avatar, the works…?

A boy can dream, but a man faces reality. Warner Bros. and Disney have no need or desire to combine their libraries of printed materials. Nor could they ever negotiate a way to create a subscriber base, and split profits. And they certainly wouldn’t give a rat’s patootie about any smaller publisher, even if say they made The Walking Dead. Instead, our comic books (both in print and digital) will continue to be a publisher-to-publisher game. ComicXology, Graphic.ly and other providers will continue to create proprietary filetypes that prevent the average user from controlling their ala carte purchases in a single easy-to-manage collection. The key of course falls back on the broad shoulders of you-know-who.

When Vince McMahon created Wrestlemania in 1985, he officially buried the original independent scene of professional wrestling. Over the next 20 years he slowly but surely eliminated his only competition. Over the next 10 years after that, he spent his profits slowly building and secretly digitizing the libraries of not only his content, but that of his antagonists. Nearly a decade after that, he’s set to launch a single product to unite every fan he’s gained and lost throughout those 30 years.

I, for one, can’t wait to sign to up. While my recent return to the comic shop has proven that industry still trips over itself with the sins of the past I can at least enjoy one publicly mocked genre in peace, and personal profitability.