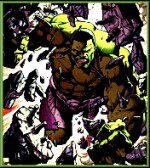 Oy. They’re at it again.

In what seems like three hours ago, Marvel Comics did a semi-reboot called Marvel Now. Unlike DC’s New 52, it wasn’t a makeover of their entire line. Unlike DC’s New 52, it wasn’t totally boring and arbitrary. It was still another contrived event that paved the way for a bunch of unnecessary first issues and a couple crossover stunts that led me to abandon reading a slew of their titles.

And, today, we get Marvel All-New Now. Or Marvel Now All-New. Or, if you’re Stanley Lieber or Jack Kurtzburg, Marvel Now – Nu?

So what is Marvel All-New Now?

Beats the hell out of me. I’ve read all their stuff, their Diamond solicitations, their website, all kinds of stuff, and as far as I can tell it’s still another contrived event with a bunch of unnecessary first issues and likely will pave the way for a couple crossover stunts that will doubtlessly lead me to abandon reading another slew of their titles.

In fact, this time Marvel is simply stuttering. They’re giving us Marvel All-New Now replacements for titles that had been published under Marvel Now that, previously, had been published by Marvel pre-Now. How many “first issues” of the Hulk and Daredevil can Mark Waid write in the 21st Century?

Do first issues carry the type of circulation boost as they used to? What about first issues that have a whole bunch of variant covers for retailers to trade back and forth to each other, bidding up their alleged “value” but rarely actualizing any gain by selling them to an ostensibly waiting marketplace?

Honest. Does anybody actually care about Marvel All-New Now? Are you excited by this “event?”

I’ll probably check out a few of these “new” titles – they’re relaunching a few characters that I’ve liked in the past, and no matter how the numbering works I still enjoy Waid’s Marvel work – as well as that of many others – and I see no reason for this to change.

Don’t get me wrong. I like superhero comics, as part of a healthy diet of sundry genres and media. I like DC and Marvel’s superheroes. I just seem to have stopped liking their superhero comic books. They willfully beat it out of me.

Lucky for me, there’s plenty of good stuff out there.