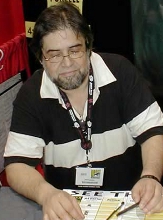 Veteran comic book artist Luis Eduardo Barreto has passed away from complications of meningitis. He was 57.

Born in Uruguay, Barreto’s work was seen most often in DC Comics titles in the 1980s and early 1990s. He may be widely known for his run on The New Teen Titans, but it was his more noirish work where he truly excelled, bringing a darker touch to Superman: Speeding Bullets, Batman: Scar of the Bat, Batman: Master of the Future, Batman/Daredevil: King of New York, The Shadow Strikes, Elvira, Mistress of the Dark, The Phantom, and my personal favorite, Lex Luthor: The Unauthorized Biography.

Later in his career, Barreto took over the long-running newspaper comic strip Judge Parker before being diagnosed with meningitis. Most recently, he drew the Superman Retroactive: 70’s for DC, and he and his son Diego succeeded Peter Krause on Mark Waid’s Irredeemable for BOOM! Studios.

His following was truly international: a skim of Twitter feeds shows as many tributes and remembrances of him in Spanish as in English. He will be missed.