REVIEW: The Ghost and Mrs. Muir 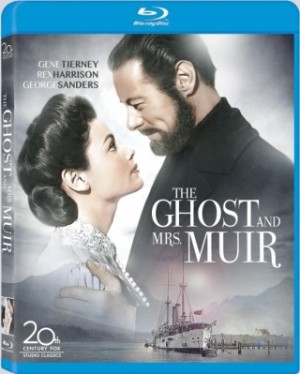 Growing up, Saturday nights were usually spent with the NBC peacock. Their sitcom lineup during the 1960s included Flipper, Get Smart, Adam-12, Please Don’t Eat the Daisies, and The Ghost and Mrs. Muir. The latter lasted just a season on the network, moving to ABC for its second and final season. It was the first time I recall learning that the series was based on a film, one I never got to see.

Thankfully, 20th Century Home Entertainment remedied that this holiday season with the release of the 1947 film, starring Gene Tierney and Rex Harrison, on Blu-ray.

While the sitcom played it for family friendly yucks, with an over-the-top performance by Charles Nelson Reilly as the ghost’s descendant, the film, written by Philip Dunne, is something far different. It is a story of love and loss, missed opportunities and evokes reminders of the overlooked romance Somewhere in Time. Captain Daniel Gregg (Harrison) is long dead but his spirit remains attached to Gull Cottage, the seaside house where he once resided. Along comes the comely widow Lucy Muir (Tierney), who has defied her in-law’s (Isobel Elsom and Victoria Horne) expectations that she come stay with them after their son has died. She charts her own course, a strong statement for a female lead at a time when women were still seen as subservient to the male’s expectations, and by extension those of his family.

Defying the locals who tell her the cottage is haunted, she takes up residence, much to the spirit’s ire. He then “:haunts” the place to chase her out but she surprises him by demanding he appear before her, which he does and so begins a most unusual relationship. He’s a gruff sea captain, used to women acting in 1947 as they did in his day but she continues to defy expectations and he gradually comes to admire her inner spirit. In turn, he begins to open up to her, dictating his memoirs which Muir has published and it becomes a surprise best seller.

Enter Miles Fairley (George Sanders), a fellow author, with designs on Mrs. Muir, who wants to have a relationship with her but is less than he initially seems. In the end, it leaves you longing for the elusive happy ending and reaching for the tissue box. It’s a shame the film didn’t net the cast any award nominations although the effective photography did get Charles Lang a nod. Bernard Hermann’s score is superb and a real gem. Director Joseph L. Mankiewicz does a superb job with a premise that could have fallen flat.

The film holds up to high definition with a good transfer aided by solid sound. This new edition comes with a commentary by Greg Kimble and Christopher Husted, a duo demonstrating a solid understanding of soundtracks and film effects so we learn a few interesting things. There’s a second commentary by Jeanine Basinger, a film professor and critic, and Kenneth Geist, who has written about Mankiewicz. Rounding out the offering is the Theatrical Trailer.