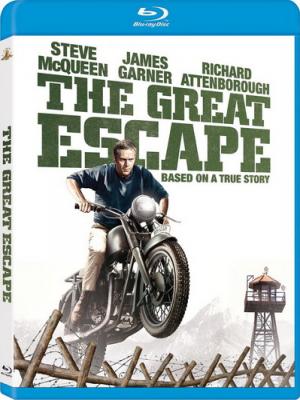 I’m not sure we’ll get every story of heroism, bravery, and ingenuity that made World War II so endlessly fascinating, but by now we seem to have gotten the best of them. The war had a scope involving millions of people on a global scale never seen before so the stories of the atrocities and acts of mercy continue to be uncovered and justly celebrated. And yet, one of the most enduring tales was not about a battle. Instead, the true story of the massive escape from Germany’s Stalag Luft III demonstrates a never-say-die attitude that demoralized the enemy. Thinking themselves clever, the Nazis collected their most troublesome prisoners and placed them in one facility, thinking they would be able to keep a better eye on them. They were all officers and treated a such, with the expectation that they would not cause trouble.

What the Germans forgot was that a prisoner’s first job was to escape and that’s exactly what these disciplined, highly-trained and clever men managed to do. It was an international effort that saw them survey and engineer three tunnels (cheekily nicknamed Tom, Dick, and Harry) that would allow 250 soldiers flee captivity. Paul Brickhill who was there, immortalized the effort in his 1950 nonfiction account The Great Escape.

It was a story ripe for Hollywood but studio after studio turned it down until finally John Sturges finally convinced United Artists to finance the production. Sturges both produced and directed from a screenplay credited to James Clavell, W.F. Burnett, and Walter Newman. Compromises had to be mader to make it palatable to Hollywood and its audiences. The American POWs who helped dig the tunnels were relocated seven months before the escape so reality was twisted to keep the yanks on hand. Additionally, characters became composites of real people, so it had the look and feel of what happened without the exact details. 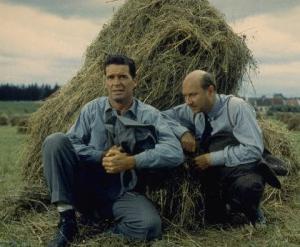 The film is headlined by Steve McQueen, looming large in the marketing but small in the grand scheme of things, James Garner, Richard Attenborough, James Donald, Charles Bronson, Donald Pleasance, James Coburn, and David McCallum. (McCallum at the time was married to future Star Trek guest star Jill Ireland, who fell in love with Bronson during the shoot.) The Stalag was reconstructed with frightening attention to detail in Bavaria and the film benefitted from a fine Elmer Bernstein score. Technical advisor Wally Floody, a former prisoner at the dreaded place, was stunned at how real it felt.

A movie about digging tunnels for much of its 172 minutes might sound dull, but Sturges kept thigns interesting by showing how the men forged bonds and overcame fear and adversity. None of the characters were especially deep but all were idiosyncratic enough to remain interesting.  Some action pieces, such as the iconic motorcycle, were added. When released in 1963, it was a surprise hit and has showed enduring staying power, referenced in countless pop culture sources and is credited as an inspiration for the questionable sitcom Hogan’s Heroes.

Now 50 years old, the film remains entertaining viewing and 20th Century Home Entertainment has just released it on Blu-ray for the first time. Unfortunately, they did not use the occasion to remaster the film; merely transfer it from the 2004 two-disc release. As a result, it looks fine but should look better.

The film was great fun and serious drama but it won no awards except from the men who were there, who later told Sturges what a fine job he did. Those anecdotes, recorded in 1974, survive on one of the many commentary tracks that were also ported over from the last release. Coupled with the fine lossless DTS-HD MA 5.1 audio, it is satisfactory but not what the movie and today’s viewers deserve.

The bonus features from the 2004 release are here with the exception of the trivia track and the photo gallery. But we do get:

The Great Escape: Preparations for Freedom (19:50): Another History Channel featurette looking at how the escape was really executed.

The Great Escape: The Flight to Freedom (9:22): Another History Channel featurette compares the reality versus the Hollywood version of events.

The Great Escape: A Standing Ovation (5:58): Another History Channel featurette examining the 1963 reaction by POWs to the film.

The Great Escape: The Untold Story (50:47): Made for British audiences, this used a mix of interviews and re-enactments.

The Real Virgil Hilts: A Man Called Jones (25:01): American Army pilot David Jones, who participated in the famed Doolittle Raid, was the template for McQueen’s character and gets a nice profile here.

Return to The Great Escape (24:09): Rubin directed this 1993 Showtime entry with Garner, Pleasance and Coburn, reminiscing.