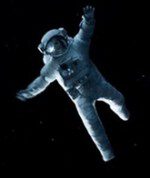 Has Gravity pulled you in yet?

Okay, that was lame. But at least it served to usher us into the movie that provides this week’s blather. (Did I do it again? Oh, my!)

Gravity is, for the third straight week, the box office champ. Most people, including Mari and I, liked it. Most, but not all. I’m aware of two kinds of criticism, leveled at the film by two of the men I most respect, both of whom shall remain anonymous, not because I’m playing the “unnamed sources” game, but because I can’t quote them exactly.

First criticism was expressed last week by a much lauded novelist and critic.  He had compliments for the filmmaking, but mild complaints about the characters played by Sandra Bullock and George Clooney. Old hat. Too clichéd. The kind of cardboard that the art of cinema should be past by now.

Point taken. But a placid defense: the movie isn’t about the characters; they are devices, vehicles to move the narrative forward, given just enough backstory to save them from being total ciphers. They’re like the characters in old-fashioned detective stories – the lounge lizard, the jealous husband, the kindly vicar, the shrewd amateur sleuth, the scarlet woman. They exist as elements in a puzzle, like the X’s and O’s in a game of tic tac toe. And if that’s the kind of pleasure you’re after, the puzzle solving kind, Mr. X and Miss O will do.

Gravity, I will claim, is about state-of-the-art space travel and filmmaking itself, about the spectacular illusions directors are capable of these days. The story gives them an excuse for being presented in pretty darn fancy theaters and even manages to generate a little suspense. It does its job, and so do Ms. Bullock and Mr. Clooney.

The second criticism, proffered by one of our best public intellectuals, is a bit thornier. Our critic finds fault with the science the movie offers as fact, and, given his credentials and track record, I do not doubt for a second that his disapproval is justified.

When I worked the superhero dodge, I had a rule of thumb: Any acknowledged, verifiable fact must be accurate. So you don’t call a solar system a galaxy or have guys schlep unshielded radioactive ore without suffering consequences, or populate Mars with green hotties who swim in the canals. The idea was to avoid adding to the planet’s burden of misinformation because some folk, somewhere, are likely to believe your nonsense. But made-up technology – time travel, faster-than-light drives – sure, have it do whatever your plot needs it to do. At least until somebody invents time travel or star drives.

A tiny caveat: it’s nice if even your fabricated science has at least a distant acquaintance with something genuine, and the farther shores of speculative physics might provide a writer with a lot of inspiration.

Gravity doesn’t pretend to be a lesson in astrophysics, any more than it pretends to be a probe of the human condition. So, it entertains, and it has done its work. And, arguably, just portraying brainy people as cool and making general audiences aware of physics are services, a task our schools don’t seem to be doing very well. In a recent survey, high schoolers in the United States ranked 25th in math and science among their peers in 34 other nations. Ouch!

So, can we agree? Gravity is good, which should be a load off Isaac Newton’s mind. But I can’t help wishing that they’d gotten their facts straight.