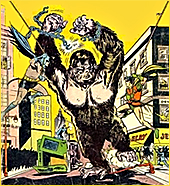 About every dozen years or so, I sit myself down and ogle King Kong. It’s a great movie, all the more impressive as it only offers a merely adequate cast (by and large). It ain’t Casablanca or Citizen Kane, and some (often me) say Mighty Joe Young is a better ape flick. But King Kong is responsible for two major events: it taught the moviegoer that movies are capable of playing to our sense of wonder on an astonishing level… and it gave birth to the whole ape-fad thing.

Outside of movies circa 1930s and 40s, nowhere is this phenomenon more visible than in comics. To this very day, massive primates threatening our safety if not our sanity are common to the comics racks. While Hollywood keeps on grinding out pathetic great ape imitations and senseless remakes of the original, comics seem to churn out contemporary simians like clockwork.

Many of these very apes made it to the animated incarnations of their host characters.

The reason for all this is so obvious I won’t insult your intelligence by stating it. However, to update this for the modern Doctor Who fan, “apes are cool.”

So. Why did I choose to bring this to your attention?

Because I haven’t seen Man of Steel yet… and, gosh-darn-it, I like apes!