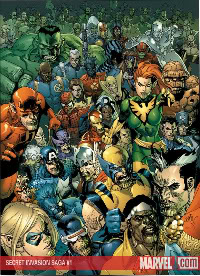 A few years back, DC released the super-thick, super-cheap Countdown to Infinite Crisis

to lead into the company’s massive Infinite Crisis event. In addition to recapping the years’ worth of hints that led to Crisis, the issue also contained some crucially important events, including the death of Ted Kord (Blue Beetle).

Marvel now has pulled that page out of the summer-event book, releasing Secret Invasion Saga

last week as a free lead-in to the looming Secret Invasion of the Skrulls. While I can’t argue about the price, the content was more than a little underwhelming. In fact, I fell asleep while reading it. Twice.

Instead of actually telling a story, this issue is essentially a whole bunch of material culled from the Marvel Encyclopedia (look under "Skrull"). In one of the world’s longest internal monologues, Iron Man thinks over all the events that have led to this point (the reveal of Elektra as a Skrull, etc.). He covers the latest interstellar goings on from Annihilation

and Skrull history as well.

While it’s nice to get a primer on things, the issue is extremely high on text and completely bereft of any new developments. If Marvel was planning on hooking new readers to the event, there’s no big eye-grabber here. They may have made some fans among insomniacs.

Between this, the grammar-unfriendly "Who do you trust?" marketing blitz and that bizarre Blair Witch-like video, Marvel’s off to a bit of a rough start to the Skrull invasion. Of course, they could probably shoot themselves in the foot and it would still sell like hot cakes with golden frosting.