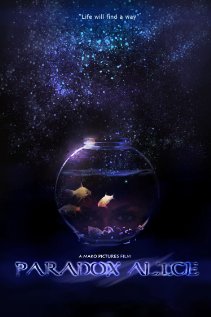 New York City, NY – Tuesday, October 1st — The Orchard, in association with Mako Pictures and Fabrication Films are pleased to announce the release of PARADOX ALICE, one of this year’s most highly anticipated independent science fiction films. A cornerstone in the new paradigm of lost-in-space sci-fi movies like Clooney and Bullock’s Gravity, PARADOX ALICE sets off from Europa in an epic outer space odyssey.  The adventure takes place in 2040 and stars Amy Lindsay (Star Trek: Voyager), Jeneta St. Clair (The Appearing), Ethan Sharrett (Homecoming), and Stewart W. Calhoun (The Eves).

A group of astronauts have been sent on a dangerous mission to retrieve water from Europa, one of the several moons orbiting the planet Jupiter. After narrowly escaping the moon to head back home, the team discovers that a nuclear war has left earth uninhabitable. While the remaining male astronauts come to grips over their losses, one of the crew members spontaneously transforms into a woman (in a scene that is as shocking as 1979’s ALIEN). Each character tries to uncover the mystery of this horrific event. Was it an act of God, or a biological reaction for keeping the human race alive? As the men vie for the last female in existence, they begin to turn on one another. All of the questions come to a head in a shocking finale.

The Orchard will be releasing PARADOX ALICE for sale and for rental in the U.S., Canada, Australia, and New Zealand across all major online video services including iTunes, Amazon, Hulu, X-box, Playstation, and Vudu as well as through Cable VOD on October 15, 2013 with a DVD release to follow.