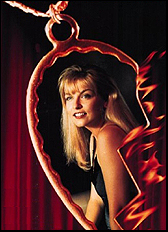 I was listening to NPR the other day – I think it was Leonard Lopate’s show – and the guest was television critic Alan Sepinwall, who used to write for New Jersey’s Star-Ledger and now has a regular column discussing television on Hitfix.com. Mr. Sepinwall is the author of the just published The Revolution Was Televised: The Cops, Crooks, Slingers And Slayers Who Changed TV Drama Forever, in which he hypothesizes that the same old same-old television drama in which the hero wears a white hat, the bad guy is in black, and truth, justice, and the American way prevails by the end of an episode, with all elements of the plot neatly wrapped up with a bow and placed under the Christmas tree (or Hanukah menorah) and with no messy, lingering thoughts to bother the viewer – is dead, gone the way of the dodo bird.

I found the conversation extremely interesting, especially as the shows Mr. Sepinwall believes are responsible for the new landscape of television drama are those usually associated with the word cult.

Cult, according to the Merriam-Webster dictionary, has several meanings, but in this case the one that applies is: a great devotion to a person, idea, object, movement, or work (as a film or book); especially such devotion regarded as a literary or intellectual fad; (b) the object of such devotion; (c) a usually small group of people characterized by such devotion.

I think this usually means that the person describing these shows really thinks “I haven’t seen it, but my colleague/competitor is raving about it, so I’d better get on the bandwagon so I can sound just as cool and auteur as he/she does.” It can also mean “everybody is talking about it in the office, and I don’t want to sound like I don’t know what they’re talking about, so I’ll just go along with whatever they’re saying.” Or it can mean “I tried watching it, and I just don’t get it, but my wife/kids/best friend/boss loves it, so I better pretend like I do.”

It also usually means that the shows don’t have the greatest ratings, but the network executives love the prestige and the publicity and being thought of as brilliant by the television critics who rave about the shows. (Hey, who doesn’t love an ego boost?)

These are the shows that Mr. Sepinwall believes ushered in a new “golden age” of television drama:

Mr. Sepinwall also gives note to those shows he believes were the “building blocks” of this new millennial golden age of television:

I never considered Cheers or ER or even The Sopranos cult hits. But reading the book, I understood why Mr. Sepinwall included them – all of the shows took chances, whether it was in the scripts or in the use of the production values such as camera work or even simple casting. I also found, as I read the book, that it was really not so surprising that so many of the people involved both behind and in front of the camera have intertwined histories, or that at one point or another in their careers they believed themselves to be “hamstrung” by the parameters of the shows with which they were involved, whether through executive interference or through mythology.

Ron Moore described the mythos of Star Trek as a “fly stuck in amber.” Bottom line, every single one of them, whether network executive or producer or writer or actor, had a desire, an eagerness, a need to break barriers. Sometimes it was because, as in the case of the WB and Buffy, a “what the hell, what have we got to lose?” attitude, as a network tried to establish itself as a viable competitor to the “Big Three” and cable. And sometimes it was because one executive believed in the vision of one writer, as in the case of Bonnie Hammer and Ron Moore.

If you’re a cultist like me (also known as a nerd or a geek), I recommend you read this book.

On a personal note… The Newells have been participants in an honest-to-God miracle.

My father suffered a stroke on Christmas Eve that progressed to continuous seizure activity. After four days in the hospital, with nothing left to do, we brought him home to die surrounded by the family he loved him.

On New Year’s Eve, he woke up.

He has no memory of that week. He has residual left side weakness, but he is getting stronger every day with the help of physical and occupational therapy. And he has the appetite of an elephant. Yesterday all he wanted was a pastrami sandwich on rye with mustard, which he ate vigorously.

He’s not out of the woods yet, but he’s got his throttle all the way open, and his nose up in the air and he’s pushing the envelope, chasing the demons that live in the sky.