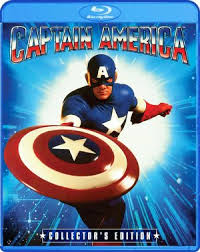 Shout! Factory has released a Blu-ray edition of the 1990 Captain America movie, a year after a DVD of the much-maligned film was released as a part of MGM’s Limited Edition collection. They deserve kudos for a nice, clean transfer but clarity and high definition cannot help a really weak story hampered by a low budget production.

As I wrote last year:

The film had actually been announced in the early 1980s from Cannon Films but in the intervening years, the studio folded and the right shifted a bit before Menahem Golan mounted it under his 21stCentury banner.

The movie languished in development until the rights were about to expire so director Albert Pyun urged Golan to let him take a crack at getting the film made for about $6 million. Marvel actually approved the script that was shot and Pyun loved its take on America’s fascination with heroism. If only some of that love found its way onto the screen.

The movie was shot in 1989 but wasn’t released theatrically and was finally dumped on video in 1992, where it was met with derisive laughter from comic book fans.

The horrific script from Stephen Tolkin (from a story by Tolkin and Lawrence J. Block) pays lip service to the source material and leaves you scratching your head at the shoddy story construction and utter lack of characterization. Significant changes were made, none of the better starting with giving Steve Rogers polio as an excuse to keep him from enlisting. Then there’s the Red Skull (Scott Paulin) now an Italian fascist, which never made sense. On the other hand, both this film and the current blockbuster made the unnecessary dramatic change in linking Cap and the Skull by having them both be products of the Super Solider formula.

There’s Matt Salinger as Cap/Rogers who is anything but the American ideal and fairly wooden in performance, perhaps because they give him nothing to work with. His first mission leads to the rocket that sent him to an icy sleep in Alaska. He’s found and inexplicably breaks free and rather than ask his rescuers anything, he runs all the way to Canada. There’s little time spent on his cultural isolation and his interactions with others is laughably minimal.

He makes his way back to Venice where he finds the love of life, Bernie Stewart (Kim Gillingham), an old woman, married and mother to Sharon (also Gillingham). He and Sharon then begin running around the world (without cash or passports or any hindrances) in search of the Skull, who apparently heads up an international cabal that directs the world’s affairs. Their current target is President Thomas Kimball (Ronny Cox), who as a boy actually saw Cap in action and has remained fixated on him ever since. He is targeted for his global environmental initiative which inexplicably would hurt the cabal’s interests.

The action is meager, the plotting a joke, the dialogue is flat, and at no time does the script allow the characters breath and expand, absorb the impact of what has been said and done. Fine character actors like Ned Beatty and Darren McGavin are utterly wasted here with nothing to do.

The film is supposedly about hero worship hence Kimball and Beatty’s boyhood fascination with Captain Midnight while the film also has references to the Human Torch and Superman which are oddities. Another missed opportunity is the relationship between the Skull (Scott Paulin) and his adult daughter, Valentina de Santis (Francesca Neri), who is dispatched as his assassin. She and her team of well-groomed killers are more joke than threat.

Much as the film looks better than it has since release, it also sounds pretty good, too. The lossless DTS-HD Master Audio 2.0 mix makes you long for a proper soundtrack. Shout! deserves brownie points for getting Pyun and Salinger to review this project for a 20 minute bonus feature, new to the disc. Both are fairly honest in their assessment that the film didn’t work although Pyun felt it would have been better with a bigger budget but trust me, it all starts from the story which was weak to behind with.