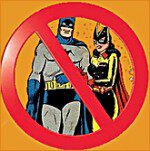 There was some discussion when the creative team on DC’s Batwoman, J.H. Williams and W. Haden Blackman, resigned after editorial decided that the title character, Kate Kane, would not be allowed to marry her fiancée, Maggie Sawyer. DC has tried to clarify that they are not anti-gay marriage but anti any marriage. Dan DiDio, DC co-publisher, stated at the Baltimore Con that heroes (at least in the Batman family) shouldn’t have happy personal lives, no marriages. They sacrifice personal happiness for the greater good. That’s what makes them heroes. Or so we’re told. DiDio said, “That is our mandate, that is our edict and that is our stand.”

I can argue it both ways. Comics are fantasies and fairy tales tend to end with “And they lived happily ever after.” It is assumed that, after that point, the story gets mundane. It becomes about the ho-hum aspects of living day-to-day. The romance is gone. The tension of “will they/won’t they” no longer exists.

That has not been my experience. The living together, the commitment to one another, gets challenged all the time. The percentage of marriages that end in divorce or infidelity, according to some, is about 50%. Happily ever after is not a given.

I’ve discovered part of the challenge is seeing past who you thought the other person was and to see who they actually are. You discover much more about the person you love after you’ve become a committed couple. In addition, that love you share grows and changes (or changes and declines) as the people in that relationship grow, decline, and change. The love the two feel, for better or worse, may not be the same five years in. All of that can be very dramatic.

However, it’s not something pop culture tends to show. Most TV shows resist having their romantic leads become a couple, and certainly not married. Moonlighting famously teased about its two leads becoming a couple for way too long. Castle, of which I’m a big fan, is dealing with that now and we’ll see how that turns out. Every once in a while, you get a show or series that counteracts that – the movie series The Thin Man, based on the characters of Nick and Nora Charles created by Dashiell Hammett, were sexy and funny and had a wonderful marriage. They are, also, the exception in pop culture.

Marvel can be no less guilty of this than DC. The decision was made to have Peter (Spider-Man) Parker and Mary Jane Watson not just no longer married but to make it so they were never married. In order to do that, they had to employ the devil. That’s sort of convoluted.

I dislike DiDio’s edict because it is just that – an edict. It doesn’t allow for a story to follow through. It is dogma applied instead of thought, creativity and imagination. It’s the same rationale that the Roman Catholic Church applies to celibacy in its priesthood: that the priest/hero sacrifices their own personal happiness to better serve. It’s codswallop in both cases. The RC rule ignores the fact that other denominations have married clergy and it actually works out mostly fine.

Look, I can certainly see that Batman has no time or perhaps inclination to be married. That makes sense within the confines of who the character is. There were and are different circumstances for others like Batwoman. In storytelling, one size does not fit all.

I’ve been doing some work for DC and I hope to do more and when playing in their sandbox, I’ll respect their rules, even if I disagree with them. However, Williams and Blackman had the rules changed on them at the last moment and I respect their decision to walk. I’d like to think I would do the same.