John Ostrander: Improving On The Legends 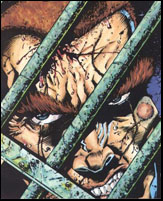 There’s a constant desire these days, it appears, to try to improve on existing works. That’s not a bad idea except when it is a bad idea. A good character, a good concept, that’s been around for a while needs to have the barnacles taken off every so often to make it fresh and work better. Movies adapted from comics have to take a good look at the source material and then tweak and change it to make it work for the big/small screen.

For me, the problem comes when the concept is changed willy-nilly until you can no longer recognize it. When J.J. Abrams re-booted the Star Trek franchise a few years back, I was dubious but I genuinely enjoyed the result (as of this writing, I haven’t seen the sequel). I can understand many hardcore Trek fans not sharing my enthusiasm. For them, Abrams wandered too far from the zeitgeist of Star Trek. I think it was nephew Bill who said to me, “I love Star Wars. But if I wanted to watch Star Wars, I’d watch Star Wars. This is Star Trek.” (He’ll get his opportunity to see an Abrams Star Wars film in the future, if he’s so inclined.)

We see it all the time in comics. Characters are re-imagined on a constant basis. The only constant is change, it would seem. Change for the sake of change, however, is not always a good plan.

I’ve been as guilty of it as the next writer. Years ago, Marvel approached me with coming up with a new pitch for The Punisher. The fans had gotten burned out with the multitude of Punisher titles and the concept was moribund.

I’ll be honest; I wasn’t much of a Punisher fan. I felt he was one-dimensional and Frank Castle had wiped out enough Mafiosi over the years to populate a small city. I told them I’d try to come up with something and what I came up with was – Castle joins a Mafia family. I thought they’d never go for it, but they did.

Different? You bet. Wrong? Yup. Did the readers buy it? Nope. It wasn’t The Punisher. I had wandered off the essential concept.

I wasn’t on the book all that long (18 issues) and, late in the run, the concept of Castle switching sides was dropped and we played a different game – Castle, as a result of an explosion, had lost his memory. He didn’t know he was the Punisher, he couldn’t remember his family being killed, but he still had the same skills, the same instincts. Frank Castle was still The Punisher although he didn’t know it. This worked better but the series was cancelled before we could get too far; in fact, we wound it up in Heroes For Hire that I was scripting at the time. Perhaps if we had gone with the amnesia angle from the start, it might have worked better.

A revamp or a remake works if you can define what makes a given character to be that character. You want to get down to the basics, not ignore them. For example, we’ve seen in recent years three different versions of Sherlock Holmes, two set in modern times. They all work more or less because they all keep key elements of the concept.

Sometimes a revamp can be quite radical. Late in my run on GrimJack, I booted the character down his own timeline and into a new body, a new persona and a whole new supporting cast. His soul was the same but it gave me, and the reader, a chance to look at the character with fresh eyes. To my mind, it stayed true to the concept of the character and the location.

My rule of thumb: if you look at a character after a revamp and you could simply give the character another name, then you’ve wandered off the concept. So long as you remain true to the basic ideas that makes a given character unique until him/herself, then it doesn’t matter how radical their evolution. First, they have to be true to themselves.