Batman: The Brave and the Bold to be feted at The Paley Center 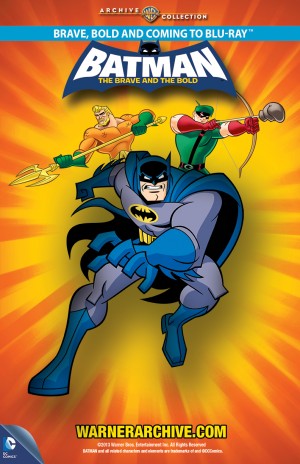 Warner Archive Collection and The Paley Center for Media, in conjunction with New York Comic Con, proudly present a special event celebrating Warner Archive’s upcoming Blu-ray™ release of Batman: The Brave And The Bold on Friday, October 11 at 7:00 pm. The popular animated television series will be celebrated with an episodic screening and a lively panel discussion featuring Diedrich Bader, the voice of Batman, at The Paley Center for Media in New York City (25 West 52nd Street).

Extremely popular on Cartoon Network, Batman: The Brave And The Bold teams the Dark Knight with some of DC Comics’ favorite and more eclectic heroes, including the Blue Beetle, Plastic Man, Green Lantern, Kamandi, Doctor Fate, Jonah Hex, Black Canary, Green Arrow, Mister Miracle and The Atom. The combinations create a perfect mesh of fast-paced action and humor for the first season, which spans 26 episodes.

Fans attending the October 11 event will have the opportunity to watch an episode and select clips of Batman: The Brave And The Bold, and hear from a distinguished panel that will include Bader, producer James Tucker, 8-time Emmy Award-winning dialogue director Andrea Romano, and Warner Archive podcasters Matt Patterson and DW Ferranti. Moderator Gary Miereanu might even have some unique prizes waiting for a few lucky audience members.

A limited number of free tickets are available for the general public. Fans wishing to receive free tickets to the New York event on must RSVP via email to BatmanBATB@gmail.com.

The body of all fan RSVP emails MUST include the following:

Tickets will be distributed on a “first come, first served” basis, and fans will be notified via email.