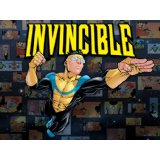 Instead of creating brand new animation, the series has decided to use the latest editing techniques to “animate” Cory Walker’s actual comic book art. Just use existing comic art and let the camera to give the illusion of movement. To younger viewers this may seem innovative, but it’s been done as far back as the Marvel Comics based cartoons from the 1960’s. It was used again, very artistically by MTV, when they brought [[[The Maxx]]] to television. Even more recently [[[The Watchmen]]] has been done in this style.

While the story and art deserve all the critical praise that the Invincible comic has received over the years, [[[Invincible the Series]]]’ biggest stumbling block is its editing. The MTV produced show has the same pacing as MTV’s promo spots, wildly kinetic with lots of flashing graphics and texts. Never let the eye settle for minute. This is fine for 15-second ad, but watching a full show like that is taxing.

In a one step forward, two steps back move, the show decided to include the actual word balloons from the comic. But instead of letting people read it, the text has a subtle shake to it. To emphasize energy, I guess. While nothing sits still on the screen, you would expect the parts you want people to read to be motionless.

A good way to judge an animated show’s sound is to close your eyes and listen. Does the soundtrack still create images of the action? In Invincible’s case, the answer is yes, but barely. The voice acting and sound effects are serviceable. They don’t do anything cringe worthy, but neither do they stand out. No Kevin Conroy or John Di Maggio here.

If the production calmed down, this could’ve been a great show that brought quality comic books to video formats. But as it is, I couldn’t stand watching this for more than a few episodes. And like I said, I’m a fan. Imagine the effect to someone who’s browsing MTV2 late at night.

Watch the first episode for yourself below. Let me know if you think I’m right or wrong in the comments section.