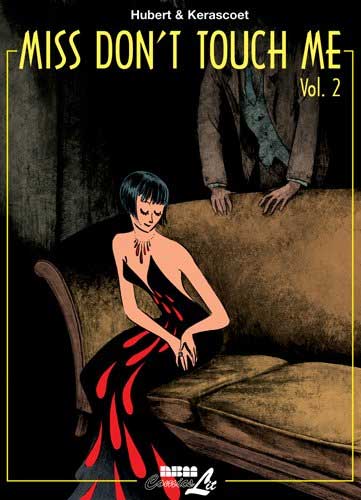 Its always a challenge when reading the second part of anything without knowledge of the first. Its also a good test of the creators to see if they’ve done their job of informing readers, new and old, of their characters and world. In the case of the French graphic novel [[[Miss pas touche 2: Du sang sur les mains]]], the creators failed.

The first book was a huge best-seller in France, selling over 100,000 copies, prompting the married creators, Marie Pommepuy and Sébastien Cosset (working under their professional pseudonyms of Hubert and Kerascoet) to revisit the world of Blanche. Released in 2006, it was nominated for the Prix Saint-Michel and has been translated and brought to the United States by NBM.

While the first book told of Blanche investigating a serial murderer, whose victims included her sister, in the France of the 1930s, this book is focused squarely on Blanche and her romance with Antoine. In volume one, she went undercover as a call girl at the upscale brothel, The Pompadour, but was determined to protect her virginity by playing the role of the strict “English governess” who would flog or dominate her customers.

We pick up with Blanche still working in the establishment,known as Miss Don’t Touch Me, and still a  virgin. Why she remains there is not really explored, and if its because of the money, she seems to take no pleasure in it. She falls for Antoine and their developing relationship propels the story into a more predictable and far less lively examination of social class warfare. In time, we meet both of their mothers and learn a bit more about how each romantic partner was raised, but everyone is seen in stereotypical fashion.

The book lacks any real suspense or any real surprise, save for a twist involving Antoine, that sends the second half of the story to the Sweet Relaxation Psychiatric Clinic. Things move along in an unsurpising way until the story ends. We don’t really learn much new about Blanche or life in Paris. Everyone seems oblivious of the war drums beating elsewhere in Europe.

Visually, for a story set largely in a brothel, there’s precious little sex or nudity. Instead, there’s a lovely fashion and design sense employed. It’s a visually interesting story with strong character designs and great use of silent panels and color.

While diverting, this is not especially engaging because the characters play to type and you’re far from surprised. All of Blanche’s strengths that I gather were on display in book one, are missing here, and she seems more of a bystander than active participant in her own story.