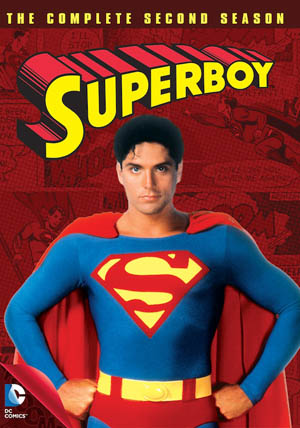 Alexander and Ilya Salkind had sold Superman to the Golan-Globus Group/Cannon but wisely retained the rest of the family including Superboy. Thanks to Star Trek: The Next Generation pioneering first run syndication in 1987, the Salkinds realized the Teen of Steel would be perfect. Looking to produce this on the cheap, they set up shop in Florida, hired science fiction hack Fred Freiberger to produce and hired a slate of newcomers to fill the iconic roles of Clark Kent, Ma and Pa Kent, Lana Lang, Lex Luthor, et. al. The series debuted in 1988 with 25 episodes and was pretty laughable stuff. Freiberger was past his sell-by date and the Salkinds didn’t know how to handle the half-hour drama format.

Still, the ratings from the 95% of the country the series reached were strong enough to keep them going. However, changes needed to be made. Freiberger was shoved out and Salkind favorite Cary Bates stopped writing comics to become Executive Story Consultant with Mark Jones.  John Haymes Newton was asked to return the cape rather than give him a salary bump. Gerard Christopher, a more nuanced actor, became the last son of Krypton and thankfully had nice chemistry with Stacy Haiduk’s Lana. Also out was the character of TJ White with Andy McAlister the new comic relief. As performed by Ilan Mitchell-Smith, his scenes are cringe-worthy. 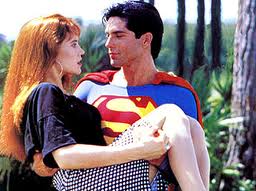 As a result, the second season, out now from Warner Archive, is a far stronger, more satisfying collection of 26 episodes. Contained on three discs, this stripped down collection comes complete with bumpers and coming attractions but no other extra features. The transfers are nice and clean so with the series never having been rerun in the States, this is your chance to check it out. 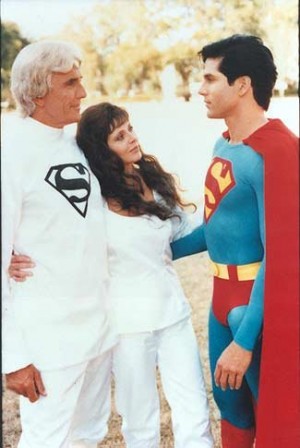 Along with Bates, the team of Andy Helfer and Mike Carlin moved from vetting the scripts to writing more than a few. With Denny O’Neil also back for more and Bates penning a bunch, there was a definite stronger feeling to the stories and characters. With less than thirty minutes to tell a story using the regulars and guest stars, there’s very little in the way of depth or character development. As a result, the brilliant approach to Clark Kent slowly mastering his powers and coming to grips with his responsibility as seen in Smallville is all but absent here. Instead, the fully function hero is merely a younger version of Superman as he faces off with the adult’s rogues gallery including Metallo and Bizarro. Salkind and Bates teamed up for a pair of stories with Dracula while Bates plucked the Yellow Peri from Action Comics for a tale. O’Neill brought back Mr. Mxyzptlk and as portrayed by Michael J. Pollard, is more slacker than imp.

There’s a loose continuity episode to episode, beginning with season opener as Sherman Howard went bald as Luthor, replacing the previous season’s Scott Wells. His threat hangs over the beginning of the season and comes back later on while Dracula and others add a bit of spine to the stories. A highlight for this season is the appearance of Britt Ekland and George Lazenby, claiming to be Lara and Jor-El, still alive. This two-parter from Bates and Jones is emotionally compelling in ways many of the other episodes are not.

Given the Florida shooting, noteworthy guest performers were few and far between so beyond those two, Keye Luke and Gilbert Gottfried (as the mischievous Nick Knack) are as noteworthy as it gets.

The regulars all look too old for their college setting and Haiduk’s ‘80s hair does not age well but there’s a lot more charm the second time around and it’s well worth a look.