Marc Alan Fishman… “and now a word from my sponsor.” 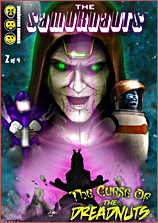 Hello all. I freely admit that this week I’m in production hell. I have 11 pages of my own story to letter. 18 more to letter when I get pages in from Matt and Kyle. And then we have to make sure Matt’s beautiful sepia ink washed pages are properly flatted, and carry a steampunk look worthy of Samurnauts quality. All of this needs to be done by the time we’re supposed to be clocking in to our day jobs, come Monday morning.

This is if we’re lucky enough to have some copies of said new book in time for this week’s Wizard World Chicago. Simply put? We have to have the book done. Why? Because issue one debuted at Wally World last year. To show up literally a year later with nothing new in hand, save for a couple Adventure Time/Star Wars posters? Not our style.

So, when in need of inspiration this week to submit a column (instead of phoning in one, like Michael Davis did this week. What?)… I turned to my rock. My redeemer. The one person who above all else makes me a better man. My lovely, intelligent, not-standing-right-behind-me-feeding-me-adjectives wife. I asked her to compile some thoughts of our now 10 years of courtship-turned-marriage. So, I present to you now, my ComicMix brethren… a little sub-article action from Mrs. Kathy Fishman.

Kathy Fishman: So I Married A Comic Book Maker

When I first started dating Marc back in 2001, I wasn’t big into comics. My knowledge didn’t go beyond recognition of Superman, Batman and Wonder Woman. I didn’t know about the Justice League. I didn’t know there were companies called DC and Marvel. Not to say I wasn’t a nerd in my own right, mind you. I’m a big movie and pop culture nerd. I retain facts that normal people don’t. Marc likes to joke that I can name certain production people like best boys and key grips, accountants and caterers. I’m actually pretty passionate about movies and it irks me to no end when people don’t get a quote just right. But that’s me.

When Marc first told me that he wanted to make comics for a living, I won’t lie: I was skeptical. I thought he would get bored with it or completely abandon the project when things didn’t quite take off. Little did I know about Marc’s perseverance and commitment to this idea. With the help of his “brothers from other mothers”, Matt and Kyle, Unshaven Comics took a few years to really get off the ground. In 2008, they started with a commissioned piece entitled The March, which after years of attending Wizard World as fans, they were now on the other side of the table. It did decent enough and I ran after Dan DiDio to give him a copy and ask him to visit the table. I did corner him, but he never did come to the table that year. I was mortified.

Since those humble beginnings, I’ve watched Unshaven Comics come to create something that all ages can enjoy. C’mon, who doesn’t love an immortal kung-fu monkey? Each year, old fans ask when the next one is coming out, and I’ve seen first hand how each con attended by Marc and the boys garners a wealth of new fans. And each year, we get closer to San Diego, the holy grail of comic conventions. I admit it; I’m in this game for the eventual vacation to visit Michael Davis (What?).

So what has it been like for me to watch my husband try to live out his dream while juggling a day job, a wife, a toddler, freelance work, bills and just life in general? Well, it certainly has not a bowl of cherries. It’s annoying because we don’t spend a lot of time together. It’s frustrating because something will get in the way of production like an emergency freelance job which leaves poor Marc frustrated. But, at the same time, it’s awesome to watch the process. It’s awesome to watch little faces (and big faces) light up at the mention of the word “monkey”. It’s precious when our son Bennett sits on daddy’s lap, and proceeds to steal his Wacom pen, and runs around the basement to Marc’s chagrin.

If this endeavor takes time away from his family and there’s no guarantee it’ll be lucrative, then why do I let him do it? Because I like seeing him happy. Because I know he’s passionate about something. Because I promised to support him. Because I believe in the end product. Because I love him. Who am I to take away something he loves? It’s not some hobby for Marc. This is what he wants to do. It’s not my place to squash that.

To Marc, and really to all the Comic Makers out there: I say keep on keeping on. Frustrating or not, I will support you and Unshaven Comics until the day you decide to no longer make comics (Marc: which is never!). In the immortal words of Stan Lee, with whom you share a birthday: Excelsior!