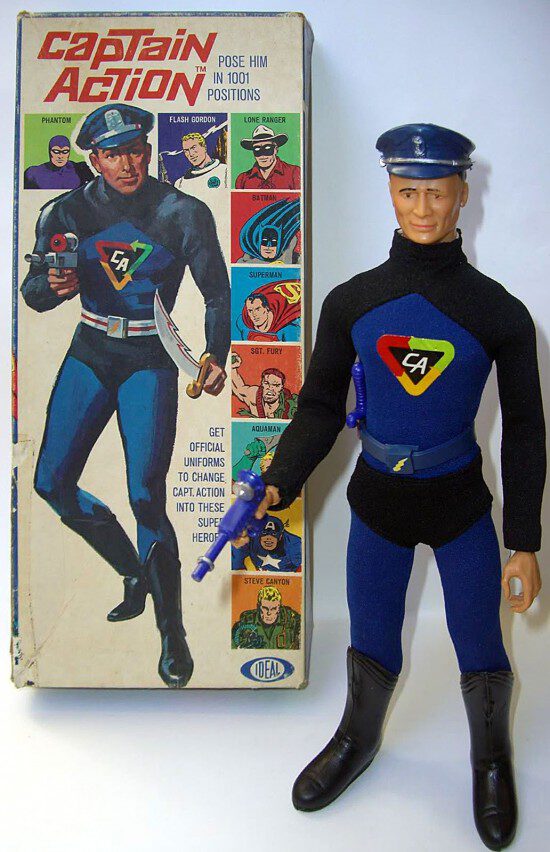 My favorite toy ever is Captain Action.

When I was around four, my mother took my sister and me to a toy store. She told us we could have any one thing we wanted. My sister made a quick decision and choose a Barbie. I spent some time trying to choose between a guitar and a GI Joe. I finally made the decision and went with the Joe.

I was as happy as I had ever been with a toy.

GI Joe soon became my favorite toy, best friend and constant companion. Not too long after I got a Black GI Joe which was just a white GI Joe painted brown.

I could not have been happier.

After a time I had seven or eight Joes, as I made sure all my relatives knew my fascination with the action figure. Christmas and birthdays always brought me a new Joe.

My Joes were the highlights of my young life.

One fateful Saturday morning I was watching cartoons and on came a commercial for Captain Action.

Captain Action was cool all by itself but what was this I was seeing?  Did I dare believe my eyes? Did the good Captain ALSO change into OTHER SUPERHEROES???

I waited impatiently for my mother to get out of bed. Saturday mornings were the only day she was able to sleep in. My mother worked two jobs six days a week, on Saturday she only worked one.

So I waited and waited for what seemed an eternity for her to get out of bed. When she did, I had to wait a wee bit longer (which seemed like decades) because she had to have her coffee. Facing my mother even today without her having had her coffee is a dangerous thing to do.

The second she went into the kitchen I joined her at the table with what had to be the biggest smile I’d ever had. I waited for her to brew her coffee (old school brewing, people, none of this bullshit Mr. Coffee) have that first sip but before I could start in on what I thought was going to be my best ‘I’ve GOT to have it’ plea my mother said;

“It’s this cool superhero that changes into other superheroes!’

As if on cue, I heard the commercial playing on the living room television, and I left the table screaming like a mad child.

My mother stood behind me while I stared again at the object of desire, convinced I would never ever want anything as bad.

“See? That’s Captain Action? Can I have it? PLEASE?”

No, I didn’t say that but thinking back that’s how I felt.

After the commercial I resorted to speaking so fast and with so much passion prying that my mother would see how my life would be over if I did not have that toy. I figured as long as I didn’t hear “no” there was still a chance. As every kid knows if you keep talking and don’t give your parents an opportunity to chime in they can’t say “no.”

“Get your coat, you can come shopping with me and we will see about your toy.”

Off to Gertz we went! Gertz was THE department store back in the day. When we got there my mother walked right to the toy department and brought me Captain Action and the Batman and Superman costume changes.

At that point I had to wonder, who was this woman and what had she done with my mother.

This was entirely way to good to be true.

As I would find out soon… it certainly was.

End of Part One.