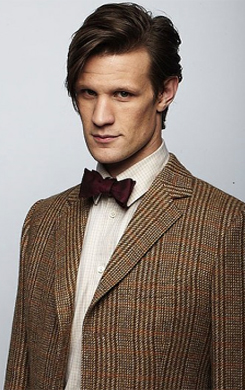 After much discussion a more than a sizable amount of betting, the BBC have announced that the actor to play the 12th (that we know of) title character on Doctor Who will be introduced to the public this Sunday at 7PM in the UK.  Titled Doctor Who Live: The Next Doctor, and hosted by TV and radio show presenter Zoe Ball.  The show will feature current Eleventh Doctor Matt Smith and showrunner Steven Moffatt, and the new actor will make their first appearance.

Revelation of the new Doctor has always been a media circus in England – bookies regularly take bets on who the actor will be, and stories rife with rumors and predictions will always draw eyes.  Eleventh Doctor Matt Smith was introduced in a special episode of Doctor Who Confidential – this is seemingly the next logical step for dealing with the instantaneous dissemination world of just a few years later.

While this will answer the question that has been on fans’ lips for some weeks now, it’s only one of several that have cropped up since.  The most immediate is how much of the new Doctor will we see in the last of this year’s episodes?

Matt Smith seemingly slipped a couple of times in panels at San Diego, saying that he had already filmed “his last episode”, namely the anniversary special.  He followed up quickly that he’d be back for Christmas, and he promised it’d be “a real belter”, but considering there’s no guarantee when the regeneration will take place.  They’ve made sure to select the new Doctor before the filming of the Christmas episode begins.

While it’s traditional to show the regeneration at the end of a season, that’s not how it started.  William Hartnell regenerated into Patrick Troughton in the middle of the season, and Troughton got right to it the next week in Evil of the Daleks.  David Tennant got his first full episode as The Doctor in the first Christmas episode The Christmas Invasion, after Christopher Eccleston left and regenerated at the end of his first and only series.  Smith appeared for only seconds at the end of The End of Time, returning for his first episode the next Spring.

We’re already seeing a two-Doctor episode for the anniversary, namely Tennant and Smith. That’s with the potential of more – Moffatt claims to have been “lying through his teeth” about what’s in the special, and rumors of a brief cameo scene by Paul McGann have started popping up again.  What, dare I suggest, if the Doctor regenerates at the end of the Anniversary special, and Smith only appears as an unseen Tyler Durden like advisor in the new Doctor’s mind?

For all the frenzy Sunday’s announcement will make, it will only be met with equal madness over the next few months until both remaining Smith episodes will bring.