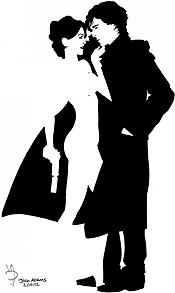 Spoiler Warning: In reviewing the second series on the BBC series Sherlock, I may discuss some plot points. If you haven’t seen it – and you should – and you want to remain unspoiled on plot twists, best skip this.

By the time I was ten I had read all of Arthur Conan Doyle’s Sherlock Holmes stories. I love the characters, I love the settings, and I’ve watched many of the movie and TV incarnations of the world’s most famous detective. Basil Rathbone was my initiation to the cinematic Holmes and, for a long time, he was indelible. My major gripe with the Rathbone Holmes movies was that, with only the exception of one or two, they were all set in the era in which they were made, the 30s and 40s, and had little to do with the actual stories. I wanted the gaslight and the London fog; I wanted the deerstalker cap and the horse drawn carriages and the steam locomotives. The era was as important to me as the characters.

So – as you might guess – when I heard that the BBC was doing a new Holmes series (simply called Sherlock) and setting it in contemporary times, I was not keen. I would have given it a miss except that I learned that one of the co-creators was Steven Moffat (along with Mark Gatiss). I’ve loved Moffat’s work on Doctor Who as both writer and show runner; bright, intelligent, witty writing with vivid characters and real heart. I couldn’t resist looking at the new show and I was so glad I did.

The series is aided immensely by the two leads – Benedict Cumberbatch as Holmes and Martin Freeman as Doctor Watson. In case you don’t know, Cumberbatch is slated to play (if rumors are correct) the villain in the next Star Trek movie and Freeman will be Bilbo Baggins in The Hobbit. The chemistry between them as Holmes and Watson is terrific.

Each series has consisted of three ninety-minute episodes and the first series ended in a cliffhanger. Holmes had confronted his nemesis, James “Jimmy” Moriarty; Watson has a vest full of explosives strapped on to him and Holmes has three snipers homed in on him. A complete death trap! How will they escape?

Oh, and Holmes himself winds up in the Royal Palace wrapped only in a bedsheet. This is not your great-great -grandfather’s Sherlock Holmes.

The Hounds of the Baskervilles deals with a possible spectral hound from hell threatening the life of Holmes’ client. The episode, The Hounds of Baskerville has that element but also brings in secret military testing and conspiracies. Changing “Hound” to “Hounds” is not just clever; it really ties to the secret at the heart of the mystery.

In the original “The Final Solution,” Doyle attempted to kill off Holmes by having him plummet down the Reichenbach Falls with his arch-enemy, Professor James Moriarty. In this new version, Moriarty is out to destroy his enemy and his enemy’s reputation. It also ends with what appears to be Holmes’ fall to his death although the very final shot of the episode reveals Holmes still alive. The question that needs to be answered is – how? Hopefully, that will be answered in the third season of Sherlock whenever they get around to making it.

Performances throughout are first rate, as are the production values. It doesn’t make the series perfect. They get out of the first season’s cliffhanger by having Moriarty getting a phone call and walking away. Not satisfying. I also found the conceptualization and performance of Moriarty (by Andrew Scott) too over the top. It was Moriarty as Heath Ledger’s Joker. I don’t mind a different interpretation that works, such as Lara Pulver’s Irene Adler, but Moriarty as giggling sociopath didn’t work for me.

And I have a concern. As I’ve said, the writing on this series is very clever and, for me, enjoyably so. There’s such a thing, however, as being too clever and that’s the trap into which Sherlock could easily fall – and that would be a more deadly trap than anything Moriarty could devise. The series so far has skirted the edge of it but it could easily step over and, sometimes, you don’t know how far is too far until you’ve gone too far.

All that said, I think this incarnation of Sherlock Holmes to be one of the best ever, constantly and consistently entertaining. It has intelligence and it has passion and it captures the essence of what made the Holmes stories work. The changes make us see the stories in a fresh way. I’m looking forward to the next season – which will be whenever our two main actors come back from Middle Earth, where no one has gone before.