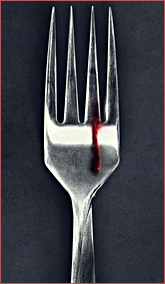 As I’ve mentioned before, I’ve watched the first season of Hannibal and I thoroughly enjoyed it. The show is fascinating and horrifying and engaging and cinematically very well done and, dammit, the food makes me hungry sometimes (which is so, so wrong, but omigawwwd, that grape gelatin dessert. I want it! Just…without the human bits, m’kay?).

The show is also not above regular and sometimes slightly terrible puns, which is why I don’t feel the least bit guilty about the title of this column (wait for it), or about saying that although I would have loved to make it to the Hannibal panel or chat with the whole cast and crew while I was at SDCC, I was happy to get at least a taste of production insight by talking briefly with Hannibal’s original music composer Brian Reitzell before BMI’s ‘The Character of Music’ panel discussion (aaaand now the title’s pun lands. Yes, I’m terrible).

We literally had just a few minutes to chat, but in that time, I managed to squeeze in several questions and learn some really neat stuff. So here’s my little amuse-bouche of a conversation with Brian!

How did you end up on the show? Were you a fan of the franchise?

Who’s not a fan? David Slade, who directed the pilot, and kind of really set the stage for everything – I had done a horror movie with him called 30 Days of Night. And that’s very much part of David’s style. I mean, music and sound design as well, you know; so he brought me in. It was his fault!

And did you know all of the Hannibal collection, or just Silence of the Lambs, or what?

I’ve only seen Silence of the Lambs. I haven’t seen the other ones. But I want to see them now; especially the Michael Mann one.

When you’re composing the music, where do you go for your inspiration? And what do you have to go on from the show?

I get the whole show. I don’t read the scripts. I like to sit down and watch the whole show, and instantly start working on it. I like to be like the audience; I don’t want to know what’s around the corner. I actually want to go there myself. So it’s very reactionary. I find that horror music is really good that way.

When you’ve got the food scenes versus the different character scenes, what is your inspiration for these different areas?

It depends on what’s going on. I love the food scenes. I used to be a chef, so I can appreciate all of the detail that goes into it.

I have to say, it makes me feel guilty, because sometimes the food scenes make me hungry.

I know! But saying that, I just keep seeing the shot of him cutting up the pig’s lungs. Those were actual pig’s lungs.

Can you tell me a quirky bit of trivia about your work on the show?

I can tell you that with the last episode, where the Will Graham character is losing his mind; David Slade had said, ‘You know, it’s like…it’s spinning out of control.’ So I thought, ‘Okay.’ And I got this thing called a bullroarer, which is – basically it’s a piece of wood on a string, that you spin around – or a bone. They’ve found one on every continent on the planet, dating back to like, 1700 B.C. And it creates this kind of whirring sound, like a Doppler. I have a few bullroarers, and I have this microphone that has four capsules on it, so it records a perfect surround sound. So what I did is, I set the microphone on the floor, and I took a bullroarer, and I spun it around my head; and it’s literally, in the show, it’s spinning, and it’s like you’re in this vortex; it sounded crazy. And we just kept upping that, so if you’ve seen it, you know, he’s in a dream, he’s in a nightmare, and then he wakes up, and he’s got blood on him, so he’s still there. The realities have completely merged.

For some reason I keep getting these jobs where people are going crazy. I’m not really a TV guy – this is my second TV thing, and the other show I did was called Boss – but in that show, the guy was losing his mind. He had this neurological disorder! And I’m always doing these psycho jobs; but that’s – I’m very proud of that.

Will there be a Hannibal soundtrack, and will it come with snacks?

Actually, there’s been demand for it, which is weird! But I’ve done soundtracks for pretty much everything. Even Boss – we did a double vinyl. And I just did The Bling Ring, so I just did a soundtrack with Def Jam, which is also weird! But yeah, there will be a soundtrack.

And what would be your preferred snack to go with that?

My preferred snack…do you know about the miracle berry? If you eat it, and then you drink lemon juice or eat a lemon, it actually tastes sweet. It takes everything sour and temporarily makes it sweet. It’s a trip. So I’d like to have a miracle berry, which is quite small, and either a lemon or something…or maybe to go even more extreme, you could do something like maybe some fish eggs. It’s Hannibal – it’s gotta be weird!

I totally agree; and I look forward to eventually listening to the soundtrack, and eating my miracle berry and drinking my shot of lemon juice as I listen to the bullroarer whirl and attempt to hold onto my sanity.

Thanks to Brian Reitzell for this interview, and to BMI for setting it up!

SATURDAY MORNING: Marc Alan Fishman… Well, actually, the woman NEXT to him…