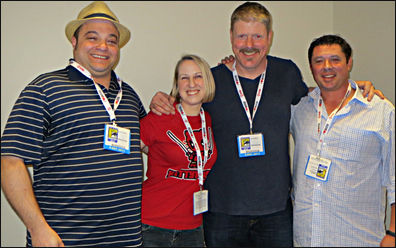 While at the San Diego Comic-Con, I was happy to get to see the panel for I Know That Voice, the new documentary about voice actors that is slated to come out this fall (and don’t forget to visit that link and sign up for DVD pre-order news!). The panel was moderated by executive producer John DiMaggio, voice of Bender Bending Rodriguez on Futurama and Jake on Adventure Time (and many other voices as well!). It featured IKTV producer Tommy Reid; co-producer and director Lawrence (Larry) Shapiro; voice actors Rob Paulsen, Dee Bradley Baker, Fred Tatasciore, James Arnold Taylor, and Tom Kenny; casting director Andrea Romano; and Adventure Time creator Pendleton Ward. And it was a blast!

I’ve talked about how excited I am for this documentary before, and this panel definitely highlighted the reasons I am looking forward to it. Not only do I find the whole process of voice acting for animation fascinating, but I also think voiceover actors and those who work with them are, from my experiences so far, not only some of the most talented creators out there, but also uniformly very nice, warm, funny people who love what they do and are just as enthused about it as the fans are. And who wouldn’t want to watch a video consisting of awesomely talented and nice people talking enthusiastically about their work in a fascinating industry? I know I can’t wait to see it.

I was also really interested in what led to the making of the documentary, and the process of putting this piece of (I predict now) fried gold together. To that end, after the panel I chatted with John DiMaggio, Tommy Reid, and Larry Shapiro about all of that and what we can expect. Here’s the interview (and you can also watch it on YouTube)!

What was the genesis of the documentary, and how did you start working on it together?

John: Larry and I were in Amsterdam, working on a music festival that we’ve done a bunch of times called Jam in the ‘Dam. I was MCing it, and he was filming it; and we were just talking, and came up with the idea, and we were like, “Well let’s try something.” We worked on it for a little bit, tossed some ideas around, shot some stuff, and then we were like, “Well, you know, it’s not really coming together.” And I’ve worked with Tommy on a bunch of projects – a bunch of documentaries; and I said, “Dude, we need to bring in Tommy.” And Tommy was like, “I’m all over this, this sounds like a great project.” So that’s pretty much how it started.

Awesome. And how did you three know each other?

John: We all lived in the same building in Hollywood; and so that’s how we know each other.

Larry: I will add that I was doing this music festival, and then John got on board to do the MCing of it; and then one night, in Amsterdam, Johnny started doing the voice of Bender and these German tourists heard him – and they don’t even speak English, and they still recognized John’s voice, and fluttered over and couldn’t believe it was him. And I’d never seen someone get star-struck over a voice in a language they didn’t even understand. That kind of gave me a clue as to how important something like this is to cover.

What was the process for making the film, and what did you all find the most interesting or challenging about making it?

Tommy: Our process began with the genesis of the idea; then it taking shape and us saying, ‘Well how do we actually get into the system?” and setting up interviews; and then having an end date where we knew we were going to capture enough interviews of every section of the voiceover industry that we were happy with. To go after the top and the best of that part of it. And then once we compiled all the interviews together it was just literally chiseling, getting it down from three hours to two hours, and then constant notes and notes and notes, where you’re constantly figuring out what’s the best story to tell in 90 minutes or less. And that’s where the final product came about. But it’s a very long process, when you’re making a documentary, and here we are 20 months later [at Comic-Con], and we had a packed room with over 3,000 people in it.

John: It’s pretty exciting. I think the biggest problem was the logistics of the project. Just getting everybody gathered; and having that done.

How many people are featured in this documentary?

Larry: Over 150. I will say that each person was at least an hour-long interview. And we had 150 people. So if you just give one minute to each person; just one great minute, you still have an extremely long movie. So it was pretty much like trying to choose between your children, what to use and what not to use. Because these people are brilliant people, and it was basically like trying to use the best stuff that we could get to make the best movie possible.

There are a lot of people in the industry; so how did you choose your focus of which voice actors to include, and which areas, e.g. TV animation, and movies, and the like?

John: I think basically it was just like, “Alright, well we need to get talent. We need to interview people.” And I just said, “Okay, well who am I working with today?” And I just asked them: “Hey man, I’m doing this documentary about voiceover. Do you want to be involved?” And we would get them on film. And once we got the ball rolling, once we got people interested in it-

John: Yeah, people started talking about it, and then we had agents calling us.

John: Yeah, the community definitely helped us out.

John: And that’s the thing about the people I work with. They’re just the most giving, the most wonderful people. The camaraderie involved in my industry is bar none…it’s unbelievable how generous of time and talent folks are. That’s one of the reasons why we made the film, too – just to showcase that.

Larry: And that’s an actual part of it. We talk about how we’re used to, in Hollywood, how people will backstab someone for a part or whatnot. And we noticed in this industry, people actually say, “You know what? I could do this, but do you know who would be better? John. You should give the job to John.” Or someone else.

John: Or I’ll be like, “Dee Bradley Baker, he needs to do this; you need to bring him in.”

John: Yeah, and it’s for real, you know?

That’s great! Now, with the rise of the internet, and fan conventions being more commonplace, do more people know your face? Has the experience of celebrity as a voice actor changed since, say, Mel Blanc’s time, and do you think that’s helped with getting interest for this film?

John: I don’t know, it’s kind of funny, because with voiceover – only down here do you get mobbed. Only at a convention do you get mobbed, where people know specifically what you do. Anywhere else…

Larry: And in Amsterdam.

John: Yeah, in Amsterdam, with German tourists; which freaked me out. But, well, anything will freak you out in Amsterdam, really, so; you know.

John: But it doesn’t really bother me [when I’m not recognized]. I didn’t get into it to have people go, “Oh my God, it’s him!” I just love to work. This is a perk, having people be a fan of your work. I love it; I mean it’s great, and I’m honored, you know – 3,000 people in a room freaking out, it’s incredible. But all I wanted to do was just showcase everybody; and I think we did that.

Larry: I would say also that we wanted to make the point that you might think it’s gimmicky being a voice of something and all that, but I really think our film kind of shows that these people aren’t so much ‘voice actors’ as much as they’re the best character actors you’ve ever seen in your life. And it just happens to be you’ve only heard them through their voices.

John: (in character) Thanks, Larry.

So obviously people who are already fans are going to want to watch this; do you think you’re going to draw in a new crowd of people as well?

So do you think the documentary is also going to be a great resource for people who want to be voice actors?

John: It’s going to be a video bible for them.

Tommy: It’s very educational and very entertaining at the same time. A lot of laughs.

Did you learn something new while making this documentary?

John: Yeah – don’t move my furniture. Larry came into my house and started moving my furniture around during my interview.

Larry: It looked so much better, let me tell you.

John: Don’t move my goddamn furniture! Larry, get off my furniture! Goddammit!

Larry: The scratches are going to come out.

Okay, so now we know, don’t ever touch John DiMaggio’s furniture. He’s tall; he will hurt you…

John: Don’t ever touch my furniture! That shit is there for a reason. Dammit.

What was the coolest experience each of you had making the documentary?

Tommy: Probably going to Big Bear Lake and going into Mel Blanc’s house, and interviewing his son Noel Blanc about Mel and listening to how Mel came out of a coma talking like Bugs Bunny.

John: Seeing the finished product. That was thrilling. And being here [at SDCC] and seeing everybody here for it.

Larry: Honestly I’d say all the interviews. With so many people I wouldn’t want to single anyone out; but I will say that actually going in to certain Futurama sessions, and getting to see John actually perform with some of the cast members; just getting to see that happen organically for me was probably one of the biggest treats.

That’s awesome; and thank you guys so much for your time.

Well, I hope you all enjoyed reading that as much as I enjoyed the interview! Not only were the guys awesome to talk to, but at the veeeery end, Bender even made an appearance. Shockingly, he wants everyone to read ComicMix.

And so I say unto all of you: listen to Bender and Servo Lectio!