Review: ‘Quantum of Solace’ on DVD 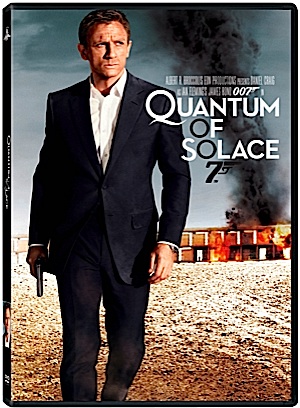 Having grown up on James Bond movies, I have been conditioned to expect certain lines, images and sounds. As a result, I was curious to see what would survive when the franchise was rebooted with Casino Royale

. They played with the martini line but maintained the title theme and gave us a fresh start (although I still think Daniel Craig is too old for Bond at this stage in his career).

The movie was pretty terrific although I noted at the time that the pacing was odd and the entire final third felt like a separate film. So, going into Quantum of Solace

, which is released on DVD tomorrow., I wanted to see what they would do next especially since this is the first film that was a direct sequel.

The events from [[[Casino]]] provide Bond’s motivations and colors everything he does in this film. Here’s the first problem with the new film: it does a piss poor job of reminding you what happened in the previous installment. When Mathis is reintroduced, I had forgotten who he was and what his involvement with Bond and Vesper were. Similarly, when Bond says M was wrong about Vesper, I have no recollection what she said in the previous film.

While Bond films are known for their action sequences, this one felt by rote. We had fist fights, a car chase, a boat chase and a plane chase. Ho hum. They were uninvolving thanks to what I call “in your face” editing so things flash by so quickly, you have no real sense of what’s going on. You get impressions based on the glimpses you have in your field of vision. Storytelling is tossed out the window for style but leaves you either confused or frustrated.

The movie is praised for being a taut two hours but I would have dearly enjoyed ten more minutes if characters actually spoke to one another as characters not plot exposition and surface characterization. Also, the movie utterly ignores time. You have no idea how much time has passed from the first scene to the last. We have no idea how Bond changes his clothes so often, when he sleeps, eats and so on. After having no access to money or passports, we next see him in a boat heading to see Mathis. How?

It wasn’t all disappointing.

Turning [[[SPECTRE]]] into Quantum was a fine updating but at no point did you really have all the dots connected for you, instead they expected you to follow along and not ask too many questions.

I loved the computer interfaces and graphics. The entire Opera sequence was the best part of the film, striking the right balance between action, tension, style and a nice reveal.

The DVD looks and sounds just fine and the first disc comes the “Another Way to Die” music video and some trailers. The second disc has a perfunctory 24-minute “Bond on Location” featurette then several really short pieces:  Start of Shooting, On Location – Olga Kurylenko and the Boat Chase, Director Marc Forster, and The Music.

The real gems are the 46:15 worth of Crew Files, all shot during production and original doled out on the film’s website. You gain a real understanding of how complicated it is to shoot a film, especially on multiple locations, dealing with different countries and cultures. Anyone interested in making movies will find these fascinating.

The Blu-ray version contains all of the above with nothing extra, somewhat disappointing for a Bond film.