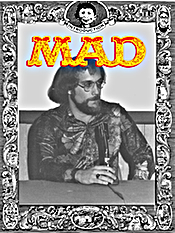 The following article is a lesson for young creators entering the business.

Remember, the comics industry is made up of relationships and the industry is filled with the bodies of young professionals who choose to go with the flow regardless of where that flow takes them or who that flow screws with.

Be very careful who you hitch your wagon too and don’t throw a good friend under the bus just because it’s what everyone else does.

There is a very short list of people I’d take a bullet for. Mike Gold is on that list. Mike and I have known each other for over 20 years. I was around three when I met him.

During the time I’ve known Mike, he has not only been a good friend but also a real confidant and staunch supporter. Look, it’s not easy being my supporter. I’ve been known to bring drama into certain situations and the easy (if not smart) thing to do when that occurs is to step away.

Step away, quickly and with purpose.

Mike has always stood by me even to the point where that decision could have caused real risk to his position at the time.

I love the San Diego Comic-Con.

Mike thinks SDCC has very little to do with comics and a bunch of other not nice things.

Mike is entitled to his opinion. I respect but disagree with Mike’s opinion.