PULP CRIME AND NOIR! ‘A WEEK IN HELL’ AVAILABLE FOR REVIEWERS FROM PRO SE PRODUCTIONS!

ADVANCE DIGITAL REVIEW COPIES AVAILABLE OF
‘A WEEK IN HELL’  BY J. WALT LAYNE!
Continuing its tradition of action packed two fisted books featuring the best in New Pulp and Genre Fiction, Pro Se Productions announces the first in a Crime/Noir Series from Author J. Walt Layne!  A WEEK IN HELL will hit the hard bitten streets on August 15th and Pro Se wants established reviewers interested in an advance digital copy to get there first!
Welcome to Champion City. A megatropolis it isn’t. But you couldn’t arrive at that conclusion by looking at the police blotter.  Most everyone in the city would tell you that a day in Champion is like… A WEEK IN HELL! 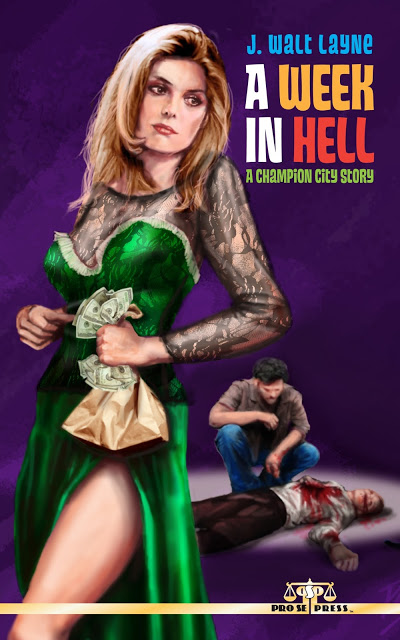 Pro Se Productions introduces the first volume of theChampion City Series of Novels by author J. Walt Layne!  A WEEK IN HELL
It all starts with a girl and a bag of cash. Candi was the kind of gal who could give a guy indigestion. She was poison, with looks to kill, a reluctant moll looking for a way out. Thurman was a young flatfoot, not necessarily the knight in shining armor. He went to shake out a brawl and nearly fed her his gun, was it any wonder he got a date? They spend an evening on the run, but where does it lead? Just when it looks like its over, BOOM! Is it a dead girl, a bag of somebody else’s dough, or both?
Written in the style of slang ridden, bullet riddled classic crime Pulp and mystery fiction, Layne’s A WEEK IN HELL drops the reader square into all the corruption and corrosion of human spirit that is Champion City.  Dames, gats, gumshoes, and brass cupcakes die, shoot, run and glitter from every page.  Edited by David White and David Brzeski, this book features a beautiful cover by Terry Pavlet with design, logo, and print formatting by Sean Ali and Ebook formatting by Russ Anderson.  A WEEK IN HELL by J. Walt Layne courtesy of Pro Se Productions!
If you are an established reviewer of books either through a site or other venue or you have established yourself as a reviewer with a site of your own, contact Morgan Minor, Director of Corporate Operations at MorganMinorProSe@yahoo.com to request a digital copy for review.   Also anyone interested in interviews with the author or other information concerning the book or Pro Se Productions may contact Morgan at the above address as well as going to the Pro Se website- www.prose-press.com
Share